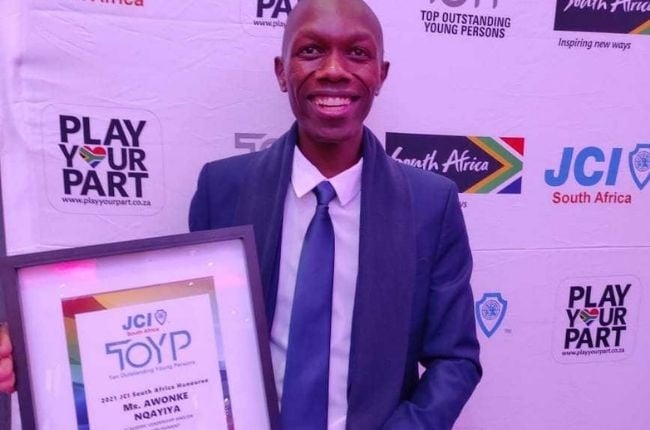 Awonke Nqayiya a 25-year-old statistics major at Nelson Mandela University has made the top 10 in the 2021 Junior Chamber International (JCI) South Africa awards.

Nqayiya hails from Centane in the Eastern Cape, developed Mathematics with Nqayiya, a study guide that seeks to simplify mathematical complexities for high school pupils.

"I started writing the study guide in 2017 and finished it for publication in 2020. The existence of this study guide is inspired by the struggles that the learners have when learning Mathematics," Nqayiya told News24.

"I had observed and analysed how one of my former Mathematics educators, Mr WZ Ngolo, simplified Mathematics for us as his learners. His teaching methods always brought light to us," he added.

"I adopted his teaching methods when I was exploring tutoring in high school and throughout the university, and they have always shown to be effective in enlightening learners in Mathematics. But the learners that could benefit were only those that we're able to be in my class," he said.

Nqayiya decided to create a study guide that would help learners all over South Africa. This study guide introduces the basics of mathematics and provides step-by-step applications that will help students master the concepts.

Grade 11, 12 and upgrading students are currently using Mathematics with Nqayiya. There are also mathematics tutors and educators using this study guide.

Nqayiya says that the feedback has been humbling and inspiring.

One matriculant based in Limpopo shared this with Nqayiya, "In Grade 11, I used to achieve level 3 in Mathematics. My biggest nightmare was the second paper. My mother bought me a copy of Mathematics with Nqayiya in Grade 12. I used it, and I managed to improve to level 7 throughout the first three terms in Grade 12. I am optimistic that I will see a Mathematics distinction next year when results are released".

"Before using Mathematics with Nqayiya, my Mathematics marks were so low, literally 35%. When using the study guide, I started seeing improvement. I managed to obtain a 70% for Mathematics for my trial examination," shared a matriculant from the Eastern Cape.

Nqayiya says that it has not been an easy journey because he had to pay for everything. He says that this limited the potential of what Mathematics with Nqayiya could have achieved.

His vision with this project is to see copies of Mathematics with Nqayiya being donated to one school such that each learner owns a copy for both Grade 11 and Grade 12. Then get to closely monitor the use and progress to ensure more outstanding outcomes.

Nqayiya applied for several funding opportunities without success, but that has not stopped him from doing great work. 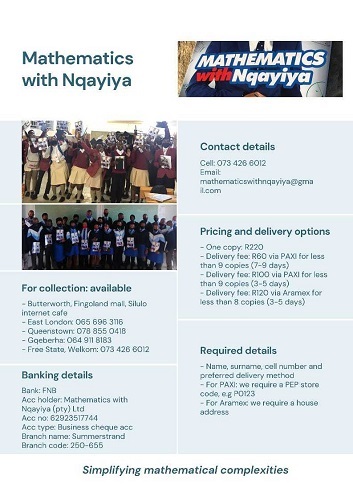 The JCI exists in more than 100 countries, and South Africa is one of them.

Being recognised as part of the top ten outstanding young people in South Africa by the JCI has inspired Nqayiya to continue being of service to others.

In April this year, Nqayiya was nominated. After two phases, he was selected to be part of the top 10. The top ten was honoured at a Gala Dinner by JCI SA on 20 November 2021.

"I am hoping that the award also gets to empower a young child that has dreams in a rural area or township but is constrained by the circumstances," Nqayiya told us.

The copy of Mathematics with Nqayiya is selling at R220. To purchase it you can visit their online store by clicking here.

We live in a world where facts and fiction get blurred
In times of uncertainty you need journalism you can trust. For only R75 per month, you have access to a world of in-depth analyses, investigative journalism, top opinions and a range of features. Journalism strengthens democracy. Invest in the future today.
Subscribe to News24
Next on Parent24
Outdoor education offers enormous benefits, but needs whole school buy-in