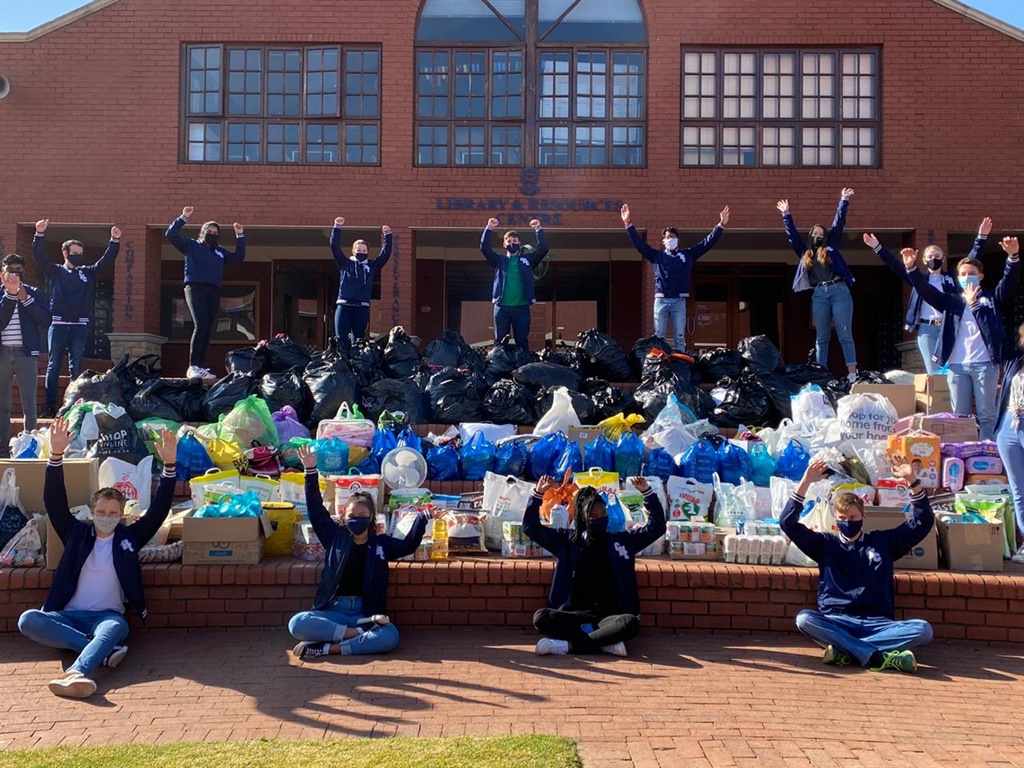 Grade 12s at Cornwall Hill College in Pretoria with the donations they collected.

A casual conversation between friends lit the fire for a matric class to collect more than a ton of charitable donations for a worthy cause during lockdown.

The Cornwall Hill College matrics of 2020 have been voted by News24's readers as the class of the year in the inaugural Super Schools competition.

During the lockdown, they collected 1 375 kg of food, clothes, shoes and other necessities for the Ditshego House of Laughter, a non-profit organisation in Centurion that takes care of children and babies when their parents aren't able to.

"It was amazing to see how everyone came together to do their part," says Patricia Chaminuka, 18, the school's head girl. She and head boy Matthew Andrews started the initiative.

"We were just having a conversation about how tough the lockdown was, and how unfair it was that some people were struggling more than others. We decided we wanted to give back in whatever way we could."

A number of matrics were identified to provide drop-off points and Andrews set up a Google map with pinned locations for every drop-off point. This was sent to the matric WhatsApp group so that everyone knew where their closest drop-off point was.

They also set up a spreadsheet to track all donations, complete with goals to be reached for each item. Every morning they set up a graph to illustrate how far they were from reaching their goals. "It started so small. We wanted to try to get 20kg of clothes and 10kg of shoes, setting our targets low so as not to be disappointed. We were blown away by the response of our class members, who donated from their own homes, but also encouraged family and friends to donate."

According to Andrews, 18, handing over the donations was a wonderful experience.

"We really didn't expect it to snowball in such an enormous way but it became something phenomenal."

Ditshego House eventually sent a truck and trailer to collect the goods and the school sent another two bakkie loads.

"We asked Ditshego what their specific needs were and bought things like nappies and face cloths with the cash donations we received. It really was the nicest charity drive I've ever watched children do," says Jenny Koster, a Grade 12 teacher at the school.

Chimanuka credits Koster for inspiring the class to do something for others.

"She really challenged us to look at ways at how we can help others. She sparked a fire in us."

See all the finalists in the Super Schools competition.

We live in a world where facts and fiction get blurred
In times of uncertainty you need journalism you can trust. For 14 free days, you can have access to a world of in-depth analyses, investigative journalism, top opinions and a range of features. Journalism strengthens democracy. Invest in the future today. Thereafter you will be billed R75 per month. You can cancel anytime and if you cancel within 14 days you won't be billed.
Subscribe to News24
Related Links
Meet our 2020 Teacher of the Year: Karla Swart
Super School Apex High: 'We showed that we are willing to do whatever it takes'
Here they are: Your Super School, Teacher and Class of 2020!
Next on Parent24
'We use real-world examples': Cottage school owner shares the benefits of interest-based learning