Looking at the annual birth data recorded between 2015 and 2020 of 18 countries, the Australian comparison company Compare the Market has revealed some interesting information. 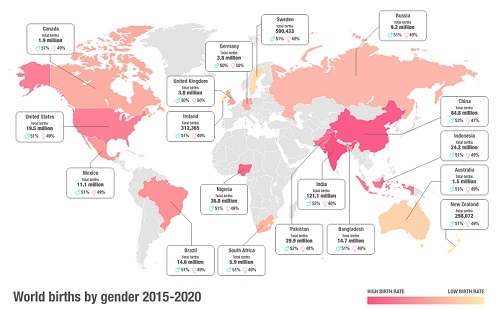 Click here for a full screen view of the world map.

There were slightly more male births reported than females in almost all countries, except for Germany and the United Kingdom, which both presented an even split. In all other countries, males presented between 51% and 53% of all births.

Despite there being more male births than females, data from the World Health Organization indicates that females have a longer life expectancy of six to eight years on average.

This is true across all ages, with newborn females being more likely to survive until their first birthday and maintaining lower mortality rates at all ages. WHO contributes the difference in life expectancy to an inherent biological advantage for females and key behavioural differences between sexes.

The CIA World Factbook records similar information. Their data suggests that over the age of 65 years old, most countries have a higher number of females than males.

The average age of mothers at their first birth

Compare the Market's research also included a look at the average age of mothers at their first birth. There was a considerable difference between the highest (Ireland, 30 years) and the lowest (Bangladesh, 17 years).

The mean age of childbearing across all 18 countries is 29.06, which is one year older than the global average (28.06). According to the study, 20 was the average age of South African mothers at their first birth. Click here for a full screen view of the map of South Africa.

According to the Compare the Market study, the number of births recorded in South Africa from 2015 to 2020 was 5.8 million.

Zeroing in on the year 2018, KwaZulu-Natal was noted as the province with the most recorded births at 190,923, while the Northern Cape ranked last with 24,195 births.

The study's sources for South African birth data were Stats South Africa and the United Nation's data around sex ratio at birth.

Submitted to Parent24 by Compare the Market.

We live in a world where facts and fiction get blurred
In times of uncertainty you need journalism you can trust. For only R75 per month, you have access to a world of in-depth analyses, investigative journalism, top opinions and a range of features. Journalism strengthens democracy. Invest in the future today.
Subscribe to News24
Next on Parent24
WATCH | 'I gave birth to a toddler': Mom had a 'whopping' 6kg baby