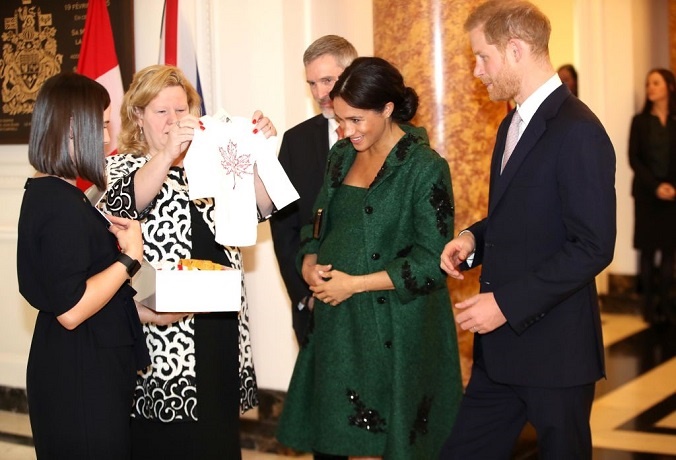 A royal baby is everyone’s baby. The Duke And Duchess Of Sussex Attend A Commonwealth Day Youth Event At Canada House.

I’ll never forget the day Prince George was born in July 2013. My husband had closed down our DSTV account to pay for our second child, and so I had to go over to my parents’ house to see that historical moment when Kate and William would reveal their new baby on the steps of St Mary’s hospital in England.

When I arrived at their house, it was clear to me that my mom had been glued to Sky News since Kate had gone into labour, and it could have been one of us that was in labour that day. She hadn’t had anything to eat or drink for hours (my Mom, not Kate!) and I hoped that the baby would come soon.

As a royal, do you think Meghan has a right to a private birth? Share your thoughts and opinions, and we could publish your letter. Anonymous contributions are welcome.

Because the thing is, a royal baby is everyone’s baby – it’s just how it is. And how it’s always been. And when Kate eventually stepped out just before 8 pm with the gorgeous Prince George and we got to swoon over him and his even more handsome dad, I wondered if I would have to stop my mom from putting a birth announcement in the Cape Times the following day.

I remember saying to her that I was surprised that Kate would put herself in the public eye so soon after giving birth, and reveal her post-birth tummy that looks like you’re still 5 months pregnant.

It was so brave of her, in a world where new moms are expected to get their bodies back before they’ve even been to their six-week check-up. And I loved that she did that so graciously, even if it was her job and her duty to do.

I also remember thinking how strange it was that she was so comfortable showing off her first baby to the whole world when I knew how precious – myself included – first-time moms can be.

You know – no dirty visitors for the first 6 weeks while baby gets into a routine, no outings for the first 6 months in case baby gets overstimulated, no cake on the first birthday, no sleepovers ever, no girlfriends ever… But my mom pointed out that when she had her 6 babies, all she wanted to do was show them off to the universe right away.

Some people are just like this, some more private. So could it be true, then, that Ms Markle doesn’t want to show us her baby, which “according to royal correspondents” was “due a week ago” and we need to “watch this space” because she’s “more private” and “feels sorry for Kate for having to pose so soon after having a baby”?

I find it so confusing. There’s nothing at all private about being a royal. Surely it’s her job to show us this baby? Surely the Queen won’t allow Meghan to put her high heel down and deny the public this basic human right of seeing the baby on its birthday?

I have been waiting for 10 months for this … 10 months to see him, her or them. Perhaps it’s not a privacy issue at all? Maybe they think the baby will be so far down the royal line it’s not necessary to show him off right away? Or maybe she has a surrogate and it’s too tricky to coordinate photos on the steps with whomever it is that’s carrying the royal baby? That bump of hers has been very inconsistent, you know, and I know Amy Schumer would agree that no one - and I mean NO ONE - can bend down when they’re pregnant and in heels, nogal.

Or maybe it’s already been born? She really has been pregnant forever and it’s hard to believe she still is. If she did have it in secret, I feel cheated and she’s really not making herself any friends. If she didn’t and she’s still pregnant – then shame.

But jokes and conspiracy theories aside, I think the reason Meghan may have gone “private” is because she’s scheduled for a medical or elective C-section (how else could Harry be heading off to the Netherlands next week unless he has an exact date) very soon, and we all know it’s not possible to stand up or walk for up to 24 hours after one.

As a royal, do you think she has a right to this privacy? Share your thoughts and opinions, and we could publish your letter. Anonymous contributions are welcome.