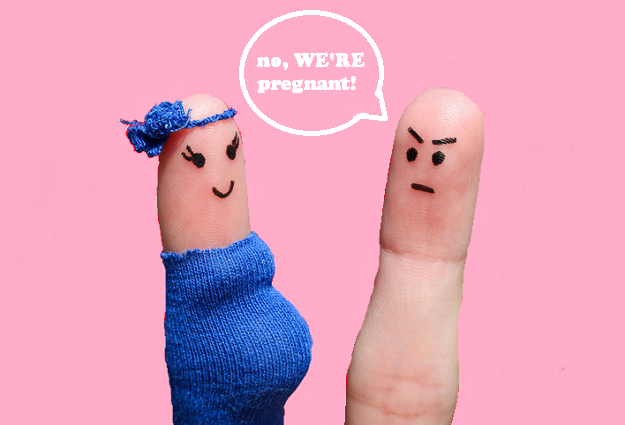 New-age rituals and celebrations such as pregnancy reveals, gender reveals and baby-naming parties have risen to popularity over the last few years and show no signs of slowing down.

It comes as no surprise that more and more fathers have been throwing the "we're pregnant" term around, when they are, in fact, not physically pregnant. Yet, it seems to just roll off the tongue.

While it's a normal or accepted thing for some people, others may be left feeling a little bit like this:

The truth is, the one who isn't pregnant doesn't experience any of the symptoms.

That means no typical symptoms of pregnancy, including:

So, you're not really pregnant then, are you?

"Oh, you both are having a baby, you AND your wife are pregnant?"

In an interview with Jimmy Kimmel, Mila Kunis did a little comedy skit and expressed her thoughts on men saying "We're pregnant", and let's just say our good sis was not too happy about it.

"Do you have to squeeze a watermelon-sized person out of your lady hole? No.

Are you crying alone in your car listening to a stupid Bette Midler song? No.

When you wake up and throw up, is it because you're nurturing a human life? No."

Check the funny clip out for yourself:

Most of the people who are against the idea of men using the term "we're pregnant" believe that physcially, men  will never have to endure any of the physical changes and struggles that women do and believe that they shouldn't try to take ownership of pregnancy.

Putting it quite candidly, aren't we?

Read Christian Dechery's answer to Why do people say things like "we're pregnant"? on Quora

How does that equate to 'we are'? It doesn't.

Like Jim Davis said, keep to 'we're having a baby' and you are good. That works. You don't need to use the biological term for the state the woman is in as something both parents share. They don't. It's not cute."

"It's a new-agey, Gen-X-esque attempt at unifying a couple and maintaining gender equality"

Some feel it's a poor attempt at enforcing gender equality.

Read Jim Davis' answer to Why do people say things like "we're pregnant"? on Quora

"...to being 'pregnant'. What? Now I get saying, 'We're having a baby'. Because once born, the baby is cared for by both parties. But only one individual is pregnant. It's a new-agey, Gen-X-esque attempt at unifying a couple and maintaining gender equality. It's stupid..."

"Don't take credit for something you don't have to go through"

Read Eileen Bradley's answer to Why do people say things like "we're pregnant"? on Quora

"because ...barf? Oh and I guess we will also gain all that weight and after the birth be left with a body we don't recognize at all as ours? And we will have to get up every hour to pee? And we will be in pain for hours, in my case over 48 in fact? And we will push a human out which despite what they tell you hurts like hell and not everybody forgets? And after that we will need stitches? And we risk all kinds of complications and illnesses? Aye, I bet we will mate. You only did the fun part, so don't take credit for something you will not have to go through."

People who think it's absolutely fine

Many people who think it's fine to use the term "we're pregnant" think that it is all about shared effort, responsibility and journey. Since the baby is half of the father, some feel it is fine for both parents to say "we're pregnant." They see it as quite the progressive phrase.

"It is a journey they are embarking on together."

Read Julie Gurner's answer to Why do people say things like "we're pregnant"? on Quora

"...While I agree with everyone who says that it will be the woman who goes through the physical difficulties, discomforts, and pain of birth... it's at least a nice sentiment in some ways to show that they're together in this new joint venture."

Some serious cheesy business indeed. Some people are just into it, each to their own.

Some are adamant that men are just as much part of the experience.

Read Susan Scher's answer to Why do people say things like "we're pregnant"? on Quora

"...Because they want to be sure they, their lady, and those viewing the couple to be very clear that they are not just waiting for the child to come out to be part of it.

NO MAN saying 'We're pregnant' wants anyone to think he believes he is sharing the experience of having human being grow inside of him, distending his belly, sitting and dancing on his bladder, swelling his feet, etc. He's just trying to get as close to it emotionally as he can and to be as supportive of his lady as he can..."

Do men ever experience the symptoms?

Have you used the term "we're pregnant" before? What are your thoughts on it? Let us know by emailing us at chatback@Parent24.com and we could publish your comments. Do let us know if you'd like to remain anonymous.

Sign up for our weekly newsletter to receive Parent24 stories directly to your inbox.
We live in a world where facts and fiction get blurred
In times of uncertainty you need journalism you can trust. For 14 free days, you can have access to a world of in-depth analyses, investigative journalism, top opinions and a range of features. Journalism strengthens democracy. Invest in the future today. Thereafter you will be billed R75 per month. You can cancel anytime and if you cancel within 14 days you won't be billed.
Subscribe to News24
Next on Parent24
WATCH | Is Kylie Jenner having a baby girl?