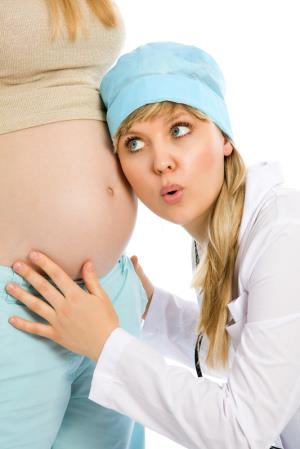 Some of the terms and phrases your gynae will use:

Alpha-fetoprotein is a protein that appears in your blood when you are pregnant. The level of AFT is tested to indicate whether your baby may have any abnormalities such as Downs Syndrome.

The water or fluid that surrounds the baby in the uterus. It’s held in the amniotic sac, sometimes known as the bag of waters.

A set of observations to measure your baby’s health after the birth. It’s usually done at one minute and again at five minutes after birth. The points given in each category are added up to gain a score out of 10.

Ante-partum haemorrhage – any serious bleeding before the birth.

A baby who is in the opposite position from the usual head down. He could be feet first or bottom first if he’s breech.

The usual position of a baby in later pregnancy – head down.

The opening up of the cervix to allow the baby through at birth. By the end of the first stage of labour, the cervix will have dilated from 0cm to 10cm (4ins).

A pregnancy that grows outside of the uterus, usually in the fallopian tube. The pregnancy has to be terminated, as it is not viable and is very risky to the mother.

When the baby’s head is placed well down in the pelvis, and in a good position for labour to begin.

Is a cut made in the skin between the birth canal and the anus – the perineum – during labour so the baby can be delivered more easily.

FH heard or FHH on your notes indicates your baby’s heart has been listened to.

FM felt or FMF will be written on your notes when you say you have felt the foetus moving.

The top part of the uterus. The height of the fundus can help the midwife check on the health and growth of your baby.

A low level of haemoglobin in the blood might mean you are anaemic, and you may need treatment.

Very fine, downy body hair on the new baby’s back, shoulders, ears and face. It protects his skin while in the uterus, but disappears a few days after birth.

A woman who has had more than one pregnancy

Sometimes called multip. A woman who has given birth at least once before.

Put in your notes when the doctor or midwife finds everything normal.

Fluid retention. This means you’ll notice swelling in your ankles, fingers and wrists, and possibly elsewhere.

An external physical examination whereby your tummy will be palpated or pressed to determine the position of the foetus.

When the placenta is lower down than normal, possibly covering the cervix.

A baby born at term means he’s born at 40 weeks (or a fortnight either way) from the first day of your last period.

Vacuum extraction. This is a method of helping a baby out if the birth is becoming difficult for mother or baby.

Sticky cream substance that coats the new baby’s body immediately after emerging from the womb.