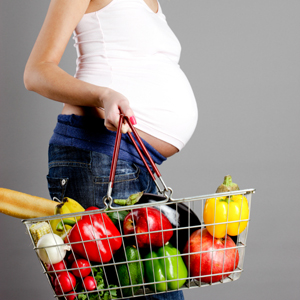 I can’t believe I’m in the last trimester. The final stretch. In some ways it feels like I’ve only been pregnant for a few days. But on the other hand, it feels like I’ve had an elephantine gestation period of at least two years and I have to think really hard to remember a time when I wasn’t pregnant.

I’m learning quickly that with the third trimester comes a whole new set of symptoms. If I thought I was feeling the heat in the first two trimesters, I had no idea what was coming my way in the third. I am a walking generator. People are innocently mistaking the permanent sheen on my face for that much desired pregnancy glow. “You’re glowing!” they coo. Uh, I think the word you’re looking for is “sweating.”

And the hunger! I am not proud of it, but the truth is that I will eat anything. Anything. Yesterday when I was feeding our fish, I thought about what a tasty little sushi morsel he would make. Sensing something was amiss he hid behind a shell and wouldn’t eat his fishy flakes. So I considered eating those instead.

Early this week at work, as I reached with one hand for the air conditioner remote control and rooted around in my bag for anything edible with the other hand, my colleague popped up from behind his cubicle wall (wrapping a scarf around his neck).

M.C: (Male Colleague): “I have just had a fantastic idea for the name of a pregnancy website!”

Me: (Dusting bits of bag fluff off of half a biscuit I found at the bottom of my bag) “Oh really? Let’s hear it then.”

Me: (Biting into the half biscuit and discovering it could actually be a congealed tissue – but deciding to eat it anyway) “Shut up or I’ll sit on you.”

M.C shuts up. But pointedly puts on another jersey and hides his lunch box behind his computer screen.

It is the final stretch in every respect: my tops, my patience, the skin over my stomach (so far no stretch marks – God bless tissue oil), and then there’s still labour and that ultimate streeetch to look forward to. Ow!

But besides the backache, restless legs, heartburn, nosebleeds and chronic fatigue, the one good thing is that I have doctor’s orders to focus my attention on three of my favourite pastimes: walking, eating spicy food and having lots of sex. I guess things could be worse.

What are the very worst things about those last few months?

We live in a world where facts and fiction get blurred
In times of uncertainty you need journalism you can trust. For 14 free days, you can have access to a world of in-depth analyses, investigative journalism, top opinions and a range of features. Journalism strengthens democracy. Invest in the future today. Thereafter you will be billed R75 per month. You can cancel anytime and if you cancel within 14 days you won't be billed.
Subscribe to News24
Related Links
Pass the light bulbs
Why am I off my favourite food?
That burning feeling
Next on Parent24
Customised diets during pregnancy? A look at nutrigenomic testing