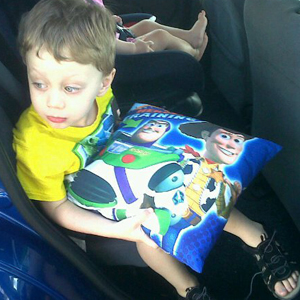 So we've finally ventured into the school zone.

If you’ve ever wondered if you should be sending your child to school – the answer is yes. I held off for as long as I could with sending Luke to nursery school because of all the usual fears – will he spend all morning standing at the window crying for me? What if the other kids don’t want to play with him? Will he feel like I’ve abandoned him?

The truth is – he probably will cry a little but his teacher will know what to do to get him distracted. Luke was very upset the first few days and the best advice we got was – just carry on! Eventually your little one will realise that they are not going to get out of going to school (regardless of the wailing and tears) and begin to settle in.

And sure, the other kids might not like him straight away, but eventually he will make a friend and then they’ll probably never leave each other’s side. And while you may feel like you’ve abandoned him, I can guarantee that 5 minutes after you’ve left he’ll be just fine!

Be prepared for day one

Luke’s favourite thing in the world at the moment is Toy Story, so on his first day he had his Toy Story back pack in hand, filled with his spare Toy Story outfits, Toy Story lunch box, juice bottle and pencil case, oh yes, and his cushion.

Don’t be alarmed if he wants to take something with him from home, it acts as a safety blanket. Just let the teacher know what he’s got so it at least comes home with him and doesn’t end up finding a new owner by the end of the day.

Leaving your child with someone new is never easy! Sean (aka Daddy) was nervous that whole morning but I don’t think it really hit me until I had to walk out the front gate and leave my baby behind. I felt like 'this is it - my little boy is all grown up...'

I felt lost having only Amy with me - part of me was missing. And even though I knew I’d see him again at 12pm, it felt like a lifetime till then. Meanwhile he was fine minutes after we’d left and was happily doing his art work which he proudly brought home later.

Luke’s routine before starting school was very relaxed – my mom would come over to my place and look after him so it was playing, eating, watching his DVDs and playing with baby sister Amy that kept him busy. So the school routine of sitting and doing tasks was quite a shock to the system.

What we found helps in the mornings is that after he’s gotten dressed and had breakfast is to just sit and watch one of his DVDs – even if it’s just for 5 minutes. He also still takes something with him but we’ve progressed from an armful of toys to just one.

Although nothing can fully prepare you or your child for their first day, it is a necessary step in their development.

How quickly did your child adjust to preschool? Comment below or mail us on Chatback@parent24.com.

We live in a world where facts and fiction get blurred
In times of uncertainty you need journalism you can trust. For only R75 per month, you have access to a world of in-depth analyses, investigative journalism, top opinions and a range of features. Journalism strengthens democracy. Invest in the future today.
Subscribe to News24
Related Links
Back to school drama
Starting Grade 1
New school blues
Next on Parent24
WATCH | Heroic 3-year-old calls the police and saves mom after learning how to call for help online