By Scott Dunlop
Share
The arrest of a local school principal for his alleged involvement in a child pornography syndicate has shocked the country. The man, also an acclaimed author, was arrested along with five others, including two other teachers, on Monday, according to News24. Public sentiment is that individuals such as these should never have access to professional positions where they work with children.

How to check if there's an abuser near you:

Those convicted of crimes of a sexual nature against children automatically have their names forwarded to the National Register for Sex Offenders (NSRO). According to the Department of Justice website, the NSRO exists in order to:

How to check whether or not a convicted abuser is working in a crèche, day care centre, school, hospital or other professional environment where he or she may come into contact with children:

Unfortunately, the details of offenders are not made public, and it is a criminal for anyone offence to disclose information contained in the register, however, those entitled to (ie, employers who work in an environment with children) may apply for a clearance certificate which would allow them to do background checks on current or prospective staff, including whether or not their names are listed on the NSRO. Concerned parents or guardians can simply ask the institution to apply for a clearance certificate and then carry out the checks.

Still, it is something schools and other similar institutions should explore, as it is impossible to spot a paedophile simply by their appearance:

Is there something which should alert us to the possibility that an adult may be abusing a child? Something in the way that person looks, walks or talks? Too often, when a sexual predator is finally arrested, friends, family and neighbours may respond with shock. “He just looked normal”, they’ll say, as if a child molester or paedophile should “look” a certain way.

Trenchcoats, shifty eyes and too much sweating?

Take a look at these images and see if you can guess which ones have been arrested on charges relating to sexual abuse of a minor, sexual assault against a minor or child pornography: 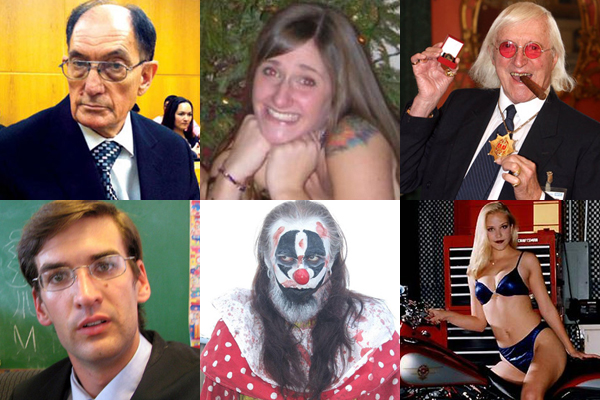 We’ve mentioned previously that sexual crimes against children often take place in the home or with extended family members. One of the most common reasons that children are chosen as victims is that they are vulnerable. Easy targets for adults who know how to groom, bully or manipulate children into performing sex acts.

Read more about how to protect your family against sexual predators:

Have you ever had to follow up on suspicions that someone is harming a child?

We live in a world where facts and fiction get blurred
In times of uncertainty you need journalism you can trust. For 14 free days, you can have access to a world of in-depth analyses, investigative journalism, top opinions and a range of features. Journalism strengthens democracy. Invest in the future today. Thereafter you will be billed R75 per month. You can cancel anytime and if you cancel within 14 days you won't be billed.
Subscribe to News24
Related Links
Santa's bum rap
Living through abuse
Convicted sex offender free to work with kids
Next on Parent24
Failing to flourish? Here's what the largest survey on South African preschoolers has revealed