I’m a heteronormative mom of two. Here’s what I’ve come to understand about the trans experience Writer Samantha Herbst as a child

I'm a 35-year-old, married (and straight) mom of two. South Africa's version of a picket fence (no dog, unfortch). I'm white bread, bro. As vanilla as they come.

You might have guessed that I'm also cisgender. I was born female at birth, with a vagina, a vulva, a uterus and ovaries, and I identify as such. No doubt my chromosomes are marked with a double-X, and if you were to catch a glimpse of me in the street, you would know that I am a woman (hear me roar).

But lately, I've been wondering whether I'd be leaning towards nonbinary on the gender spectrum (that is, identifying as neither explicitly male or female). If I had come of age in 2022, instead of 25 years ago, would I feel more comfortable to be gender-nonconforming?

It's a bold statement for someone who's breastfed both her babies and feels quite attached to her period, but it didn't start out this way for me. When I was nine, I started binding my breasts. Chest binding – the process of flattening your chest with restrictive materials – wasn't really a 'thing' back then, not to my knowledge at least. I used duct tape (which, incidentally, can be far more destructive than getting a legitimate breast binder).

I got the idea from a character in a movie who taped down her boobs every morning, and I really wanted that for me. Anyone remember Christina Ricci in Now & Then? Like Ricci's character, Roberta, the more my breasts grew – ahead of all my friends – the more I loathed them.

Had I been able to buy a breast binder at the time, I would have jumped at the chance. I can even imagine how appealing hormone blockers would have been for me – anything to slow the process of my unforgiving entry into adolescence.

At 12, as my acne raged and my hips widened, I wore my brother's old clothes for a good few months. They were comfortable, roomy, and they made me forget about what was happening to my body at skin level.

Look, I know I'm no snowflake here. No-one's adolescence is necessarily 'easy'. More than that, I do not want to discredit the very real dysphoria experienced by trans people. My mild experience of body part dysphoria was by no means as intense as true gender dysphoria, and I am not suggesting that trans teens will eventually "grow out of it'. What I think I'm suggesting, is that I might be more on the gender spectrum than I realised, unless my hatred for my breasts and burgeoning body was, quite simply, everyday teenage growing pains.

Is this a 'craze' or are times simply changing?

In writing this series on parenting transgender and nonbinary kids, I had to interrogate this side of myself and truly consider both sides of the argument:

Is the growing transgender movement an 'easy out' for our kids to avoid the pain of adolescence? Some desistors think so. Emboldened by TikTok and a growing army of gender-neutral influencers, being transgender has, according to desistors, become a trend or 'craze' that marginalises the heteronormative among our youth.

Are they right? In 2022, are you considered 'out' if you're not gender diverse? Or, has the growing acceptance of people on the LGBTQIA+ spectrum – and the developing language around gender diversity – empowered our children to be more accepting of people who are different from them? Are our kids more in tune with their identity than we were at their age? Are times simply changing?

When I was pregnant, one of my work colleagues came out as transgender. It was surprising and unexpected, and it shifted the social dynamics at work. It meant that this 'thing' that was happening in the outside world – this brand of 'otherness' – had infiltrated the straight and narrow of our typically heteronormative office life. But within a few months, the dust settled and the new identity shift among the staff had become a non-event (for me at least). We carried on.

On a personal level, what shook me more violently was when one of the co-hosts of my favourite parenting podcast, One Bad Mother, opened up about her five-year-old being transgender. The co-host detailed how she knew something was up, what she did about it, who she consulted and how she would continue to support her transitioning daughter.

When I first listened to the episode, my reaction was far more visceral than when I'd learned about my colleague's identity. My eldest boy was about 18 months – coming into his own as a little personality – and the podcaster's story hit home.

What if my son was not a boy after all? What if he'd come to resent his little penis that I'd painstakingly crafted in my womb? What if he rejected the name I'd so lovingly picked out, just for him? What if everything I thought I knew about my child turned out to be a lie? I felt heartbroken and foolish already.

I realise now that I was making his identity (whether trans or cisgender) about me. I'm a mother, I guess, and I'm only human. One positive outcome of my self-indulgence (and premature spiral) was that it dramatically shifted my perspective on gender diversity. I was no longer indifferent. I was affected, and I wanted to be involved, because I was a parent.

Isn't it funny how, when you're forced to think about a societal issue in the context of parenting, your perspective shifts pretty quickly? 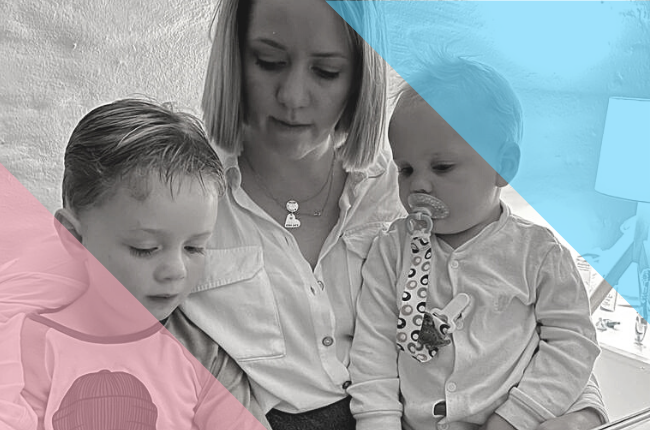 A deep dive on gender diversity

One Bad Mother sent me into a deep dive on gender diversity that – ultimately ­– resulted in this series of articles. It made me realise that when I navigate gender diversity as a parent (because I have and will), I want to be better equipped (it's also why I've considered my own place on the gender spectrum).

If, in the future, either one of my sons identifies as trans or nonbinary, or one of their friends or classmates are walking that journey, I want to be considerate about what I say and how I react. I want to support my children in the way that they need. I want to be an example. I want to be a parent and an ally.

Having done my gender-diversity homework more intently these last few months, I'm hard-pressed to find a parent who doesn't want to support their child in the same way. Every parent I know or have spoken to wants their child to be able to approach them with anything, no matter what. This applies to both behaviour and lived experience; what they've done and who they are.

At the same time, I'm going to go out on a limb and say, regardless of colour and creed, South African parents struggle with our legacy of oppression. Even the most liberal and open-minded of us are, at the very least, recovering racists, recovering homophobes and recovering transphobes.

Not one of us will ever be able to truly disinherit the endemic oppression that plagues us. We might understand that gender is on a spectrum, but so is our liberalism (or our conservatism). We're all on differing planes when it comes to learning and unlearning some core beliefs that we might be wrestling with.

But this can also make it increasingly difficult to connect fully with our children who, for the most part, seem to be on yet another plane of understanding when it comes to gender.

Some simple advice I received

As parents we are running ourselves ragged because we don't understand the ever-expanding world of gender diversity. It's hard to keep up, which is why this series will continue to grow and evolve beyond the current collection of articles. The aim is to add to the existing body of content, keep abreast of the world's understanding of the transgender experience, and answer your pressing questions.

But the plethora of information about the gender spectrum will still make anyone's head spin. My own thoughts spiral daily as I wrestle some personal demons and interrogate my core beliefs. However, in the storm that rages in my head, I've found a pocket of calm that I'd like to impart to you:

This was the best advice I received in my endeavour to understand the trans experience, and I believe it's the first key we need to navigate this ever-shifting societal space. It might also save your relationship with your child and, potentially, their life.

"Your children are not your children. They are sons and daughters of Life's longing for itself. They come through you but not from you. And though they are with you yet they belong not to you."

Samantha Herbst is a freelance writer, editor and parenting journalist with a special interest in mental health, sexual health and women's rights. She is co-host and founder of The Great Equaliser podcast, an unfiltered podcast about parenting.Don't miss a story!

We live in a world where facts and fiction get blurred
In times of uncertainty you need journalism you can trust. For 14 free days, you can have access to a world of in-depth analyses, investigative journalism, top opinions and a range of features. Journalism strengthens democracy. Invest in the future today. Thereafter you will be billed R75 per month. You can cancel anytime and if you cancel within 14 days you won't be billed.
Subscribe to News24
Next on Parent24
Some children as young as 3 can have clear sense of their gender identity, says psychologist