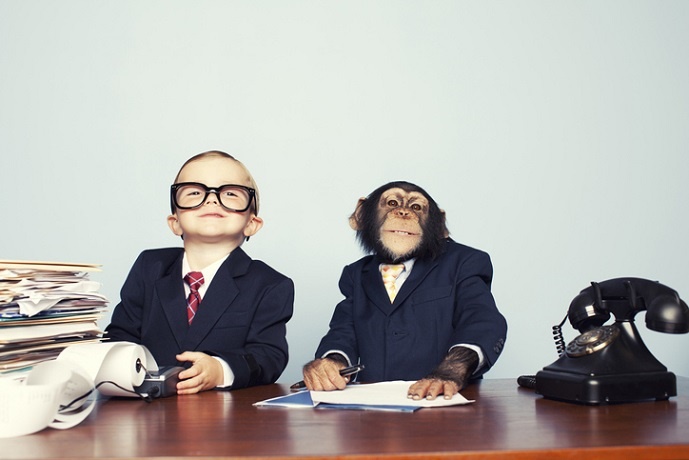 Some people thought Charles Darwin was suggesting that, over a very long period of time, apes turned into people. He was not.

The short answer is no. An individual of one species cannot, during its lifetime, turn into another species. But your question is so interesting because it helps us think about life, evolution and what it means to be human.

It is remarkable that despite the extraordinary number and diversity of different species, an adult from one species typically does not produce offspring with the adult of another species (although this is less true of plants, and there are notable animal exceptions).

The same is true for other species that are not so obviously different to us. There are many species of Drosophila fruit flies (the very small flies that are attracted to rotting fruit, especially bananas) that all look very similar.

But young flies are very rarely produced by males and females of different Drosophila species.

This observation would lead you to think that species don’t change much, and yet they do and sometimes over quite a short time period (for example, in response to climate change). This raises a very interesting question of how species change, and how new species emerge.

About 150 years ago, Charles Darwin provided a very compelling explanation in his book On the Origin of Species. His book was widely criticised at the time, partly because his ideas were not properly understood. For example, some people thought Darwin was suggesting that, over time, apes turned into people.

The story goes that during a very lively, public debate held a few months after On the Origin of Species was published, the Bishop of Oxford, Samuel Wilberforce, unkindly asked Thomas Huxley, a friend of Darwin, whether “it was through his grandfather or his grandmother that he claimed descent from a monkey?”.

Read more: Curious Kids: Do animals sleep like people? Do snails sleep in their shells?

The question misrepresents Darwin’s theory: modern monkeys did not turn into humans, but rather humans and modern monkeys share a common ancestor, which is why there are some similarities between us.

How different are we from chimpanzees? Analyses of our genes, which carry the information that make us what we are, reveals that chimpanzees, bonobos and humans share a very high proportion of their genes.

We are similar, and some people argue that this similarity is sufficient that chimpanzees should have the same rights as people. But of course we are also very different, and the most obvious difference lies in something that is not usually regarded as biological – our culture.

So to return to your original question – no, chimpanzees don’t (and didn’t) turn into people, but we do share ancestors, who over a very long time became what we now recognise as different species: chimpanzees, bonobos and humans. And that makes chimpanzees and bonobos rather special.