Mr Shabalala lived on a big piece of land. He had a lovely house, an apple tree, hens and a vegetable patch.

The apple tree was very big. The branches stretched far into his garden and over the wall into the field behind the wall. Sometimes there were so many apples that he didn’t know what to do with them all.

His hens gave him large, brown eggs. He could not eat all the eggs that his hens laid, so some eggs hatched and he had more chickens than anyone else in the town.

The vegetable patch was always full of wonderful things to eat, but sometimes there were too many pumpkins, mealies, potatoes and other vegetables. 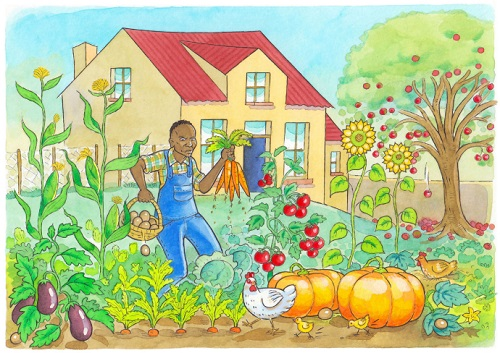 But Mr Shabalala was not a very nice man. He did not like to share. If anyone came near his house and garden, he became very angry. So Mr Shabalala did not have any friends.

Some things made him so angry that he would shout. When people sat in the shade of the apple tree in the field behind his wall, they made too much noise. When the apples fell off the tree behind his wall, the children would pick them up. They played, ate apples and made too much noise. Sometimes his hens escaped through a little hole in the fence. When they did, they laid their eggs in the field behind his wall. He heard the women talking when they found the eggs and knew they were taking his eggs home. But worst of all, sometimes a little boy would knock on his door and ask for seeds from his vegetable patch.

One day Mr Shabalala was so angry that he decided he was going to stop everyone from bothering him. He grabbed his saw and cut down every branch of the apple tree that hung over the wall. He blocked up the hole in the fence so that the hens could not escape. And he was so angry that he dug up his vegetable patch.

“At last I will have peace and quiet without anyone bothering me or stealing anything,” he said.

But there was something that was even worse than that. It was now so quiet that Mr Shabalala got a headache. Poor Mr Shabalala, he didn’t know what to do with all the quietness. So he opened his front door and shouted the loudest shout that he could, just to make some noise.

Suddenly the people ran up to his house.

“Have you hurt yourself?”

“I … I …” Mr Shabalala didn’t know what to say. Even though he had been so nasty and unkind, everyone had come to see if he was alright. Mr Shabalala felt so bad he started to cry. “I’m sorry,” he said. “I’m so sorry.” “We’re sorry for making a noise in the shade of your tree,” said someone.

“Oh no,” said Mr Shabalala. “I was so selfish and rude and I am sorry. Please, all of you come inside and I will share everything.”

From that day Mr Shabalala did share everything. He also promised to let the branches of the apple tree grow over the wall and to leave a little hole in the fence for the hens and chickens.

When everyone left he smiled happily because now there were happy noises outside.

Then suddenly Mr Shabalala realised that he still had no vegetable garden. At that moment there was a soft knock, knock on his front door. He opened the door and there stood the little boy.

“Aaah,” he said, “you are the boy who always asked for seeds.”

“Yes,” said the boy, “but I know you don’t have a vegetable garden now. Can I help you plant one?”

And for the second time that day, Mr Shabalala had tears in his eyes. But this time they were tears of happiness.

The story was written by Wendy Hartman and Jiggs Snaddan-Wood (illustrator).

We live in a world where facts and fiction get blurred
In times of uncertainty you need journalism you can trust. For 14 free days, you can have access to a world of in-depth analyses, investigative journalism, top opinions and a range of features. Journalism strengthens democracy. Invest in the future today. Thereafter you will be billed R75 per month. You can cancel anytime and if you cancel within 14 days you won't be billed.
Subscribe to News24
Related Links
The secret to turning your child into a reading dynamo is timing, and according to experts its...
You could be putting your child off reading – here’s how to change that
Reading to your kids could result in a lifetime earnings increase of R2m
Next on Parent24
It's Storytime! Read: Christian, the striped bandit and the birthday surprise