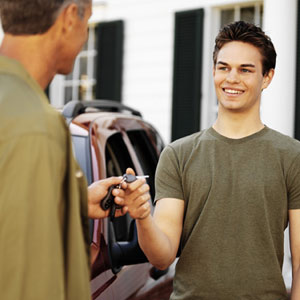 Teenage boys often become difficult at the ages of 13-15 especially since they are going through many bodily, emotional and psychological changes. The precious little boy that you loved and adored is now lost in a teen's body.

It is natural that he will begin to pull away from you into his own world, becoming both secretive and brash, and it is also natural for you as his mother to feel lost, bewildered and confused. Many mothers wonder how their golden boy became a male ogre.

Testosterone has hit and as women we don't have firsthand experience of this developing maleness! It requires some understanding and insight from us. He is developing from a boy into a man. His biology (testosterone) is probably directing the obvious physical and mental changes, yet he is also affected by society's messages of what it is to be a man.

A young teen’s aim is to do his own thing and acquire some independence from mum yet mum's aim is probably to be close and to connect and to control. Suddenly simply loving is not always wanted or it is simply not how he wants it. You probably come down on him and he becomes compliant for awhile and then he's back at you again. Your mothering approach of 'loving-kindness' seems to be shifting and you are left more with "don't talk to me like that", "watch your manners young man"... Your own mother's voice comes out of your mouth and you wonder if all the loving and lifting did any good at all. Frustration sets in and you wonder where the golden years went.

You sense that he doesn't want you around at all. Sometimes he simply ignores you, other times he tells you straight out. He starts saying to you: "Don't treat me like a child", "leave me alone", "no I will go on my own". Some mums respond to the growing distance by trying to do more. What is happening? What is the answer? It's simple: mothering needs to change. You also need information about adolescent development.

The formative years and the middle childhood have laid the foundation for good self-esteem, basic relationship skills, social skills, morality and family preferences and functions. You may think he has forgotten everything you enforced in these areas but it is there, it is laid down.

The teens take you into new territory and parenting is a whole new job. It is easier for us to hang onto the familiar and especially what worked before. Raising this generation of teen boys requires a paradigm shift in our mothering style. When a mother is stuck in old mothering habits she normally resorts to what worked in the past. Her movement is towards her son. She wants to continue to nurture and be involved by doing.

On average I have found that most woman continue to mother their teen son with the same mothering style that she used when he was a boy. Therefore her needs are inwards at the time that his needs are outwards. The drama is obvious. Mum needs attachment, closeness and control. A teen boy needs his independence and autonomy.

There is a gender intensification during adolescence and his new found macho behaviour is directed at mum. Strong and masculine has often meant dominance and female compliance. He is naturally compelled to follow the pack and the 'rules' of being a man. Being dependent on mum means 'he's weak' (according to the male pack) and so boys often flex their muscles around mum in an attempt to prove his independence and maleness. The messages Western society gives out on how men should be, full of machismo, 'boys don't cry', and must be virile are wrong messages about what maleness is and should be. Boys think they must be like this.

Men traditionally flex their muscles in two ways: through dominance or hard silence. As a son begins his growth into manhood he pushes to gain a new position with his mother. One that is more equal and separate. He tries to make space for his masculinity that he is so unsure of. The first step is to push against the feminine that he has cleaved to for so long. This awakens his bravery.

This is a crucial time. Mothers need to be wise and empowered, to be sure of themselves and focus on their own life satisfactions. Yet continue to love and stay connected to their sons, demanding him to be accountable for his actions and words, in order for him to be safe, strong yet still in touch with his heart.

Mothers generally become excited to see their young men filled with testosterone, energy and boisterous enthusiasm, yet are frustrated when he displays surliness, aggression, rudeness and lethargy. Mums want their sons to express emotions and have respect for girls and women, yet he’s become monosyllabic!  It is a challenge for mothers: can she allow his developing masculinity and yet stand her ground against his assertive behaviour?

We want him to be responsible and accountable but we also want control. This creates another clash. A boy can only develop these positive characteristics by becoming more independent and making choices for himself. As a parent of a teen, you aren't going to get through this clash if you continuously use an authoritarian manner. If you are supportive and assist the developmental tasks you solve conflict and at the same time you raise the kind of adult you want for the long term. One who can make own decisions, is self-regulating and considerate of others’ needs.

We live in a world where facts and fiction get blurred
In times of uncertainty you need journalism you can trust. For 14 free days, you can have access to a world of in-depth analyses, investigative journalism, top opinions and a range of features. Journalism strengthens democracy. Invest in the future today. Thereafter you will be billed R75 per month. You can cancel anytime and if you cancel within 14 days you won't be billed.
Subscribe to News24
Related Links
Girls think, boys think
Know your child
Age of Facebook rage
Next on Parent24
Would you leave your 7-year-old home alone?