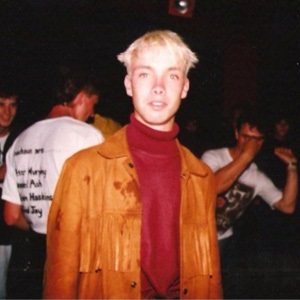 I went to high school in Cape Town in the 80s. When you see people throwing 80s theme parties, costumes include fluorescent greens, neon pinks and the madness that was legwarmers. They hint at the androgynous style which was supposedly popular back then, but, in my all-boys’ school, it certainly wasn’t. That didn’t stop me from wearing insane outfits and eyeliner outside of school or to parties, though, and I was on the receiving end of consistent verbal abuse from pupils and even teachers.

It was awful, and the victimisation was relentless. But, being stubborn, I refused to give in. A typical “conversation” would go like this:

“Dunlop, are you gay?” [Cue laughter from other kids]

You see, I refused to see homosexuality as an insult. And yet, in this boys’ school environment, it was used as the ultimate take-down. A verbal fist. Now, because I am not gay, I couldn’t possibly understand what a similar experience must feel like for a kid that is either openly gay or especially one that has not come out. I know that you learn to expect the clumsy insults but you never lose that churn of fear in your belly that someone may beat you up because you’re… different.

So the high school years were difficult ones, but I also know kids that had it worse than me.

Now, we’re not in 1988 anymore, but I have heard kids using the “gay insult” in schools, in movies and on TV shows.

I read of kids being bullied to death, not only in those miserable playgrounds and classrooms, but relentlessly on social media channels. As a teen, I got to go home, close the door and crank up the music- forget about the barrage of insults. Bullied kids these days may not escape the endless noise, but stay tuned in to anonymous trolls, rude people and known enemies.

I have overheard children insulting other kids at my children’s schools, and it’s terrifying. Do their parents overlook the name-calling? Is there no parenting technique for steering kids out of this behaviour other than the “sticks and stones may break my bones but words will never hurt me” rhyme? Children will have to learn how to deal with rudeness and aggression as part of life, it’s true, but they should not have to deal with ongoing abuse or verbal bullying.

It’s not even about being called a specific word. “Gay” is admittedly a loaded word, but it’s the insult that is not an insult. The bullying attitude is what contextualises it; the taunting, the veiled or blatant aggression.

This tragic story of a transgender teen who killed herself brought back difficult memories for me, even after having been out of school for 27 years.

As parents, can we take that simple step of teaching our kids to be kinder to each other, and to help them understand that if kids are different to them, that’s no threat, it is just simply how things are?

As Stephen Spender describes them in his poem My Parents Kept Me From Children Who Were Rough, these kids “threw words like stones”. We can change those kids. Save childhoods, save lives.

4 tips for preventing verbal bullying of your child, via nobullying.com:

•    Don’t tease them with name-calling words like “fatty”
•    Encourage them to develop new friendships
•    Make sure your child’s school has a system in place for preventing it
•    Encourage your child to participate in activities they enjoy and praise their successes.

Do you correct your kids when they use insults?

We live in a world where facts and fiction get blurred
In times of uncertainty you need journalism you can trust. For only R75 per month, you have access to a world of in-depth analyses, investigative journalism, top opinions and a range of features. Journalism strengthens democracy. Invest in the future today.
Subscribe to News24
Next on Parent24
Highs and lows of swimsuit selfies