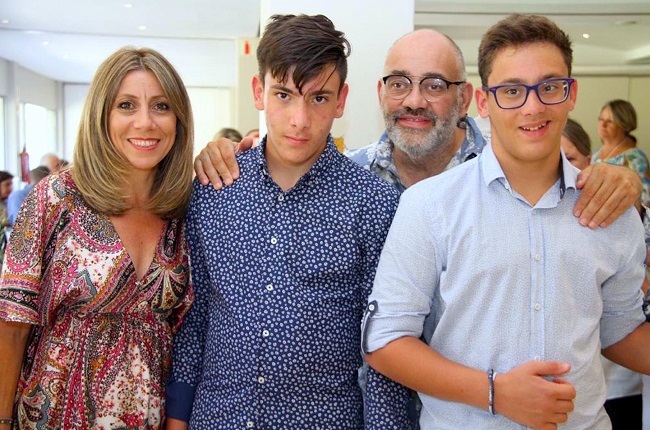 In the early 2000s, babies born four months prematurely were at the extreme edge of what was considered feasible for survival.

Today, however, two teenage twin brothers are living proof of what can be achieved with the love of their devoted parents and the dedication of a team of specialists and neonatal intensive care nursing professionals.

"When my babies were delivered by emergency caesarean section on 5 December 2004, I was in shock. Being a first-time mom is usually stressful, but our twin boys were so tiny and underdeveloped that my husband Aki and I were warned that they were extremely vulnerable. It was a surreal, frightening time," says Yiota Hadjipetros, mother of twins Alexandros and Stefanos.

"We were in survival mode for months, praying and spending every moment we could with our boys in the neonatal intensive care unit (NICU) at Netcare Park Lane Hospital. To this day, we are so grateful for the 'family' of caring medical specialists and nurses who took care of our babies and, by the grace of God, saved their lives."

Read: WATCH | US boy is the world's most premature baby, according to Guinness World Records

"Because the twins were so premature, there was great concern for their survival, especially for Alexandros," says Dr Neli Stoykova, who was the Hadjipetros boys' paediatrician at birth and is still practising at Netcare Park Lane Hospital, like many of the NICU nurses who cared for the highly vulnerable premature twins around the clock for the next four months.

"This was a real spiritual journey for everyone involved. As always, we gave our all so that the tiny brothers would not only have the best possible chance of survival but would also have the best possible quality of life, knowing that the clinical decisions we made at that early stage to help save their lives would also influence their future wellbeing," Dr Stoykova says.

"At that early stage of development, every organ is affected, and there are complex challenges to be managed day by day at every level. The twins had to be intubated, ventilated, and closely monitored around the clock. We spent many days and nights at the hospital with the parents watching over the babies."

"We had no time for Christmas and New Year. Who could feel like celebrating when the twins were still in a critical condition? All we wanted was to see an improvement in their condition. After several long and very emotional weeks, one night, we were all sitting in the NICU watching over the babies with their parents."

Also read: 'The best strategy': Expert advice on how to take care of twins or triplets

The smaller twin, Alexandros, who weighed only 700g at that stage, had to have surgery and then developed life-threatening renal failure. The specialists feared that hope for his survival would be lost if he did not pass urine within 12 hours.

"There was a tiny drop of urine in a catheter tube, and we were anxiously watching its progress, praying for it to safely leave the baby's body. NICU nurse Sr. Pat Naransamy came on duty to care for the boys during the night shift, and she told those of us who were still there after our day shift to go home and get some proper rest."

"It was Sr Naransamy's 40th birthday, and she told us that she had prayed for one birthday wish – to keep the twins safe and guide their progress," Dr Stoykova says.

Today, Sr Naransamy is still caring for babies in the NICU at Netcare Park Lane Hospital, and she remembers that night vividly.

"I think I remember all the 'preemie' babies I've cared for, and when you get to know them so well, you pick up on their personalities – and some of them have such attitude, I just love them. Even though Alexandros was so tiny, I could see he had a strong spirit and will to survive," she adds.

"Thankfully, Alexandros made it through the night, and we were so grateful when his condition gradually began to improve," says Sr Naransamy, who joined the hospital's NICU in 1991.

Dr Stoykova adds that the boys needed a blood donation on another occasion, and the community enthusiastically responded to the call for donors to come forward to find the matching required blood type.

"It was so rewarding to see the community embrace these babies. Everyone wanted to donate blood to help the twins. The support was really wonderful."

Must read: It was sad to see a motherless baby - frontline worker recalls early days of work in Covid-19 maternity wing

"Nowadays, if babies are born four months premature, it is considered a viable age, which is an indication of the considerable advancements in neonatal technology and treatment techniques since the Hadjipetros' twins were born."

"By aligning our treatment to evidence-based best practice, we are constantly refining the techniques available to care for premature babies and to have better outcomes."

"Sadly, however, some babies who are born so prematurely do not survive despite our best efforts, while others often do not have an easy start, and it still may be a long journey for the family," Dr Stoykova says.

"Since the twins were born, there have been many advancements – even though back then, our NICU at Netcare Park Lane Hospital was a very modern unit for its time."

"Our approach now focuses on multi-disciplinary care, with neonatologists and specialists from various disciplines routinely working together on developing holistic treatment plans for each preemie and other vulnerable babies in our NICU."

"More formalised support is also available for the parents, who are regarded as integral members of the care team, and also have access to support services such as counselling these days." Twins Stefanos and Alexandros are pictured with paediatrician Dr Neli Stoykova, who is still practising at Netcare Park Lane Hospital some 17 years later.

Sr Naransamy adds that the NICU incubators were open top in 2004 when the twins were born, and plastic sheets were used to create a humid protective environment for the Hadjipetros boys because their skin had not fully developed.

"Now the incubators are much more advanced and are designed to mimic a womb-like environment for the premature babies. We have input from neurodevelopment specialists, speech therapists and other disciplines, with everything geared towards providing a nurturing and stimulating environment for those who need specialised care in the first weeks or months of life."

Verena was one of the NICU nurses who looked after the Hadjipetros twins in 2004.

"There are immense documented health and developmental benefits associated with age-appropriate breastmilk for babies."

"Breastmilk is donated by eligible women breastfeeding and have excess milk, which they express under specific hygienic conditions and deliver it to Netcare Ncelisa human milk banks or depots based at Netcare maternity facilities. The milk is then pasteurised, tested, frozen and safely stored until it is needed," Bolton explains.

Through Netcare Ncelisa human milk banks, the Netcare Foundation supplies age-appropriate breastmilk free of charge to certain identified premature and underweight newborns with compromised health, both within the public and private sectors. The one thing that has not changed is the absolute commitment of the NICU teams.

"You become very attached to the babies for whom you care and so invested in their progress. You can't turn it off when you go home. It is a privilege that the parents entrust us with their precious babies, and we care for them as if they were our own. We also support and encourage the parents because we respect what an emotional time this is for them," Sr Naransamy says.

Shortly before their 17th birthday, the twins' parents arranged a special reunion with Dr Stoykova and the NICU team, who cared for them in the uncertain months before they were finally discharged on 15 March – nearly four months after they came into the world.

"Although we have kept in touch, it felt like time for a get together to celebrate with the amazing team who became like family to us in that time. Dr Neli Stoykova is phenomenal, and we thank God for putting her and this special team of nurses there to care for our twins," says Mrs Hadjipetros.

"We are so grateful to them, and the nurses were amazed to see how Alexandros and Stefanos are developing into young men – thanks in no small part to the efforts of the specialists and caring NICU team."

At birth, both twins had bleeding on their brains. However, any effects on their development would only become evident later when they were growing up.

"We have had a long journey with the twins' health and supportive therapies. Both Stefanos and Alexandros have worked hard, and Stefanos is now in Grade 10 in a mainstream school," Mrs Hadjipetros says.

"Alexandros continually exceeds expectations, as one of the specialists told us he would likely be quadriplegic for life, but then, with the help of a physiotherapist recommended by Dr Stoykova, he surprised us and learned to walk within 18 months."

"He has some learning barriers, and we have done a lot of research into various education models, and we work with Alexandros daily to help make the best of his abilities," Mrs Hadjipetros says.

Stefanos says that as a survivor of prematurity, his message to others is perseverance, "Push through the difficult times, believe in yourself and don't listen to people who don't believe in you."

Alexandros adds, "Be who you are and don't give up. Be gentle because whatever a person shows to the world, inside they are sometimes afraid."

"The twins show such maturity for their age in many ways, and we have such respect for their parents who have done an incredible job raising them to be the fine young men they are today," Bolton adds.

"All but one of Netcare's hospitals with maternity units across South Africa have NICUs. Nurses working in these highly specialised units are trained and experienced in the requirements of caring for premature and highly compromised newborn babies."

"As with the Hadjipetros family, it is not uncommon for the bond forged with the families while their babies are in the NICU to continue into the future."

"We are delighted to see the Hadjipetroses now together as a family so many years later – this shows the power of what can be achieved for premature babies with the support of a dedicated NICU' family' guided by evidence-based best practice and committed to caring centred around the unique needs of each baby," Bolton concludes.

We live in a world where facts and fiction get blurred
In times of uncertainty you need journalism you can trust. For only R75 per month, you have access to a world of in-depth analyses, investigative journalism, top opinions and a range of features. Journalism strengthens democracy. Invest in the future today.
Subscribe to News24
Next on Parent24
Commission for Gender Equality welcomes 2022 Teenage Pregnancy Policy