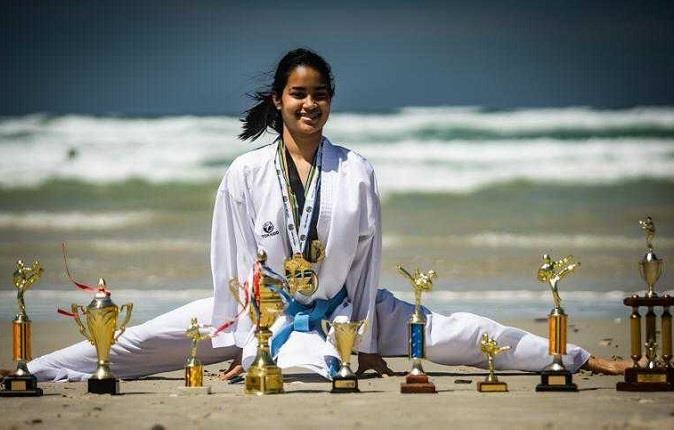 Currently, South Africa is placed at Alert Level 1, with a few restrictions following the discovery of the Omicron variant and President Cyril Ramaphosa's speech this past weekend.

In response to the discovery of a new variant, several countries including the UK, Egypt and Rwanda announced a ban on flights from South Africa.

This affected many families, and there was a last minute scramble as people tried to get back home. Other's had to face the fact that their long-awaited trip home would have to be cancelled once more.

One of the devastated travellers experiencing this ordeal is 16-year-old Zahra Boltman. The teen showed an interest in Karate, following in her sister's footsteps when she was young, and has became very good at the sport over the years.

She's so good, in fact, that she is ranked number one in a Kumite category in Karate SA, which qualified her to represent South Africa at the United Federation of Karate (UFAK) Championships which will be held in Egypt this coming week.

Thanks to the sudden travel ban, her dream to participate there has been shattered. News24 reached out to her mother, Nuraan Boltman, who told us that her daughter was devastated after hearing that she would not represent South Africa in Egypt.

"My daughter has been excelling in most of the competitions. She worked hard, and she was ready for this event. Unfortunately, it's not going to happen," she told us.

"Zahra's dream was shattered when we got a message on the eve of her departure that the team won't be going due to the Covid-19 situation whereby Egypt Air cancelled all flights. This, however, is not going to stop her from pursuing her goal to enter the Olympics one day."

"I know that God has a better plan for her, and I know that she is going to come out top. I know that it's her time now," she added.

"Zahra has many tournaments on her bucket list which means extensive traveling and putting in school work and that is going to cost the family mega money," her mom told us, adding that she plans to open a trust fund account in Zahra's name so that she can help her realise her dreams.

There is no doubt that very soon Boltman will be picking herself up and preparing for her bright future.

The teen is currently a Grade 10 student at Sans Souci Girls SS and she trains at Karate Zen Dojo in Goodwood her Sensei in Laeeq Rhoda.

She has at least 100 medals from karate tournaments under her belt, and is currently ranked no.1 in the Female Junior division by Karate SA.