The World Cup racing season might be dealing with a delayed start, but the bikes are ready.

Although the legendary South African mountain biker is recovering from Covid-19, his racing mechanics have assembled a new Santa Cruz V10 and shared all the technical specifications. A big bike, for a big rider

The most influential and successful downhill mountain biker in history, Greg Minnaar is also very tall, for a competitive cyclist, at 1.95m. For years he struggled to find a frame that was comfortable to ride on.

His singular quest for an adequately large downhill mountain bike saw Santa Cruz’s engineers build frames with huge measurements, capable of rolling 29er wheels. There were sceptics, who believed that the larger wheel size would not work in downhill racing, but Minnaar proved them wrong.

For the 2021 season Minnaar will be on a size XL Santa Cruz V10. This all-carbon downhill mountain bike frame features a unique colourway, proudly showing his South African heritage.

There is also a custom rear dropout, which lengthens the chainstays (and wheelbase) on Minnaar bike’s by an additional 5mm. Regarded as one of the world's best tyres in extreme terrain. Greg rides the Maxxis Assegai - which named (Photo: Santa Cruz bikes)
Supplied

What tyre pressure, does a multiple world champion use?

To find all the available grip on those treacherous and steep downhill trails that he’ll be racing, Minnaar uses his signature tyre, from Maxxis, called the Assegai.

If you want to compare tyre pressures, Minnaar’s Assegai’s are pressured at 26psi up front and 28pis at the rear.

Interestingly, despite the harshness of terrain and his size, there are no tyre inserts to provide additional pinch flat puncture protection. 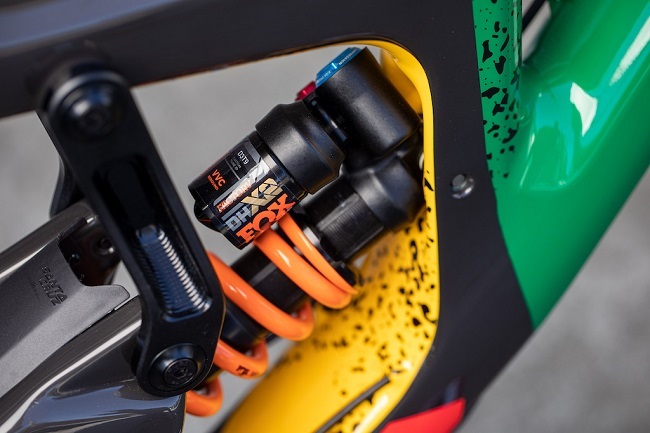 Suspension settings to keep control on the wildest trails

Suspension is something that generates terrible OCD amongst all mountain bikers, with all those available settings. On Minnaar’s Santa Cruz V10 he runs 116psi of pressure in his Fox 40 fork, with four volume tokens.

Providing rear-wheel control when landing those huge jumps or drop-offs, is a Fox coil shock, with a 250kg tension rated spring. The list of adjustable settings selected by Minnaar for his rear shock has the low-speed compression at 6 clicks, high-speed rebound at 3 clicks and low-speed rebound at 8 clicks. Like his fork, Minnaar prefers to run the shock’s high-speed compression fully open. How Minnaar pedals and steers

Downhill racers very rarely pedal, but when Minnaar does he turns a 34t chainring and 11-24t ratio rear cassette. The slow him down, there are huge 203mm brake rotors.

Giving the South African mountain biking great all the steering leverage and control he requires, is a massive 800mm wide handlebar, with 30mm of rise.

You will never have the riding skills of Greg Minnaar, but you can buy those same Maxxis Assegai 29x2.5” tyres he is using this season. And make your own mountain bike, a bit more 'pro'.

We live in a world where facts and fiction get blurred
In times of uncertainty you need journalism you can trust. For 14 free days, you can have access to a world of in-depth analyses, investigative journalism, top opinions and a range of features. Journalism strengthens democracy. Invest in the future today. Thereafter you will be billed R75 per month. You can cancel anytime and if you cancel within 14 days you won't be billed.
Subscribe to News24
Next on Ride24
These are the latest junior mountain bikes from Switzerland