South Africa’s mountain bike racing calendar returned to some normality in the last quarter of this year, with 2022 promising even more.

Riders committed to keeping dietary and training discipline throughout the festive season will be focussed on one of South Africa’s most testing events: the Attakwas Extreme.

Respectfully known as the Hell of the South, the Attakwas Extreme is scheduled for 15 January. It single-day race, routing 121km from Oudtshoorn to the Great Brak River. On the southern side of the Outeniqua mountains the road surfaces improve but big climbs remain. (Photo by Zoon Cronje/www.zcmc.co.za.)
Ride24

What makes the Attakwas Extreme such a challenge is its rocky terrain and energy-sapping climbs. Not to mention the challenge of managing oppressive Karoo heat, during summer.

Riders climb a total of 2900m along the 121km route. Much of that elevation profile includes some rather technical climbing, where riders need to apply both bike skills and powerful cadence to keep momentum. Or dismount – and push. 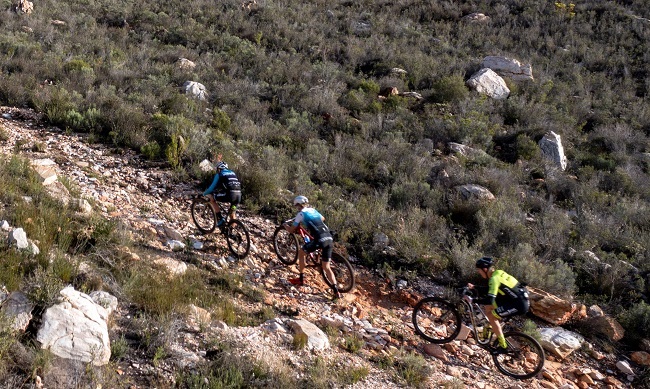 There is no shame in walking some of the Attakwas climbs. (Photo: Zoon Cronje/www.zcmc.co.za.)
Ride24

Tough on tyres and riders

During peak summer, the Klein Karoo heat will make for a war of attrition through the first half of the route. Ask any 'Ratel' - those riders who have completed five or more editions of Attakwas - the Klein Karoo can be brutal on tyres and mountain bike components.

On the southern side of the Outeniqua mountains, terrain smooths after navigating the remote Attakwaskloof. But there are very few 'free kilometres' on the Attakwas.

Four significant climbs draw every reserve of energy from exhausted legs. If riders can conquer the Attakwas, they are ready for the 2022 mountain bike stage racing season. The climb to the King and Queen of the Mountain hotspot is often among the race’s decisive moments. (Photo: Zoon Cronje/www.zcmc.co.za.)
Ride24

All eyes will be on Wessel Botha, who won this year’s Attakwas in a new course record. Many mountain bike racing followers will also be expecting great things from current Cape Epic champion, Matthew Beers.

In the women’s race, the favourite is reigning South African marathon champion, Yolande de Villiers. As a three-time Attakwas winner, only Ariane Lüthi has won more editions of the Hell of the South than the Oudtshoorn local.

We live in a world where facts and fiction get blurred
In times of uncertainty you need journalism you can trust. For only R75 per month, you have access to a world of in-depth analyses, investigative journalism, top opinions and a range of features. Journalism strengthens democracy. Invest in the future today.
Subscribe to News24
Next on Ride24
Rapha chooses pink for EF Education-Easypost pro riders