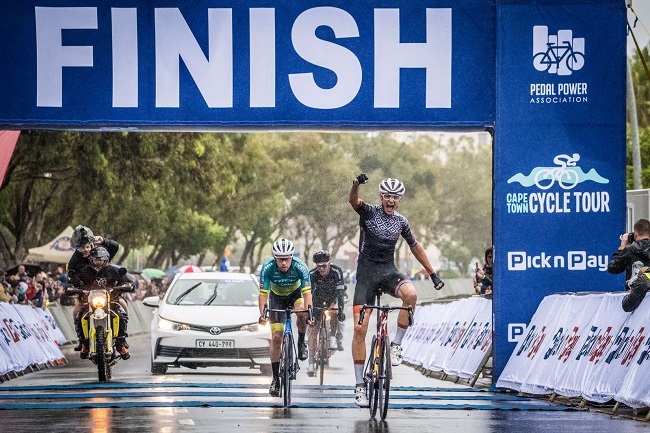 The first wet CTCT since 2006 made for terrifically challenging conditions – and exciting racing.

Meteorologists promised rain and it arrived early, with the pro riders rolling out on wet roads. Cool conditions might reduce fatigue, but a slick road surface increases risk.

For the pro riders, any wet CTCT is all about managing available grip - and not crashing on those high-speed descents. Race favourite Nolan Hoffman could not equal Willie Engelbrecht’s record of five CTCT wins. It was wet from the start, with riders having to manage available grip and deal with spray. (Photo: @slam_clark)
Ride24

Powering through the rain

Breakaways rarely have the desired outcome at any CTCT, but a group of leading riders who pulled their collective strategy at Smitswinkel Bay, defended this advantage into Sea Point. The rain increased as this group of four men positioned for the sprint, in the race’s final kilometres.

It was 22-year old Marc Pritzen, besting his breakaway group in a close sprint to the line - showing great presence of mind in the race’s final meters, despite increasing rain. Pritzen won in a time of 02:37:55, with Sascha Weber second and HB Kruger in third.

Pritzen won last year’s South African road championships in Swellendam and has a 947 Ride Joburg victory to his credit, too. The CTCT title will further enhance his palmarès. Another win for Kim

In the women’s category, defending champion Kim Le Court De Billot defended her title. "It was the most exciting CTCT to ride. In the rain. These conditions make it so much more interesting."

One of Le Court De Billot’s strongest rivals, and five-time CTCT winner, Cherise Willeit, crashed on Chapman’s Peak and was forced to withdraw.

We live in a world where facts and fiction get blurred
In times of uncertainty you need journalism you can trust. For 14 free days, you can have access to a world of in-depth analyses, investigative journalism, top opinions and a range of features. Journalism strengthens democracy. Invest in the future today. Thereafter you will be billed R75 per month. You can cancel anytime and if you cancel within 14 days you won't be billed.
Subscribe to News24
Next on Ride24
De Marchi is remaking all your favourite vintage cycling jerseys