Sani2c's trails are ready and the views are always spectacular. (Photo: Kevin Trautman)

One of South Africa's oldest stage races is ready for its 18th iteration, despite a route that suffered damage during the KwaZulu-Natal floods.

Sani2c ranks as one of South Africa’s big three stage races – along with Berg&Bush and Wines2Whales. It traditionally starts the domestic three-day stage racing season, but even the most meticulous organisers can’t control the weather. Some of the trail damage from the floods was immense. (Photo: Farmer Glen)
Ride24

An inspired ride – from mountain to coast

It takes in some of the most splendid scenery in KwaZulu-Natal, exposing mountain bikers to terrific Underberg and forest trails.

A deeply rewarding mountain bike ride, but not easy. Riders consume 4 500 doughnuts and 245kg of bananas, during the event. The combination of singletrack trails and inspiring wilderness, have made the Sani2c an esteemed MTB event. (Photo: Sani2C)
Ride24

Assessing the damage – and taking action

With a route starting in the Underberg and finishing in Scottburgh, the Sani2c trails were not spared during KwaZulu-Natal’s dramatic floods.

Despite the rebuilding challenge, race organiser Glen Haw and his team have refurbished the route. With a team of 100 working furiously after the floods, Haw has ensured Sani2c riders will experience all the singletrack joy this event is renowned for.

Haw and his team have ventured beyond their usual realm of trail maintenance for the event, which might make it one of the best Sani2c routes in memory. Vernon Crookes game reserve will be a pleasure to ride through, after the Sani2c team's repair work. (Photo: Anthony Grote)
Ride24

Glen Haw and his team have ventured way beyond their usual Sani2c route preparation.

"We have been able to assist Vernon Crookes to repair some flood damage, where we don’t usually do route maintenance as it’s a game reserve."

Being there allowed us to sort out some issues we have had on the trails in the past, so we are very pleased with how it’s looking. Mtagati Bush is looking better than it has ever been." 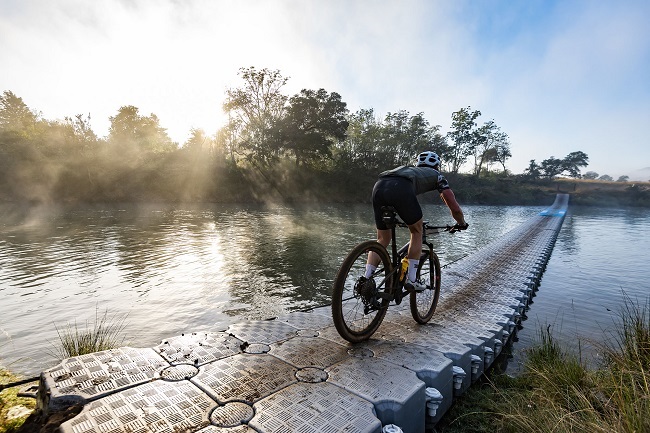 All the floating bridges are in place except the final one, at the finish. (Photo: Anthony Grote)
Ride24

Not the traditional finish

The route has not escaped unscathed and Sani2c’s floating bridge finish in Scottburgh has been altered.

"Unfortunately, we can’t use the lagoon at the finish. It washed out, and we could not put the floating bridge up. Fortunately, we can go straight over the R102 as the road was washed away at a point and is closed."

Sani2c Adventure riders start their mountain bike experience on 11 May and finish on the 13th. The Sani2c Race is scheduled for 12 May and finished on the 14th.

We live in a world where facts and fiction get blurred
In times of uncertainty you need journalism you can trust. For 14 free days, you can have access to a world of in-depth analyses, investigative journalism, top opinions and a range of features. Journalism strengthens democracy. Invest in the future today. Thereafter you will be billed R75 per month. You can cancel anytime and if you cancel within 14 days you won't be billed.
Subscribe to News24
Next on Ride24
Overstrand MTB – the De Hoop Vlei Experience