This device can track stolen bicycles With a signal sensor and clever app, you can make sure your bike is safe - and recoverable (Photo: Afterlock)

Alterlock has developed an anti-theft device for bikes that may prove ingenious in deterring bike thieves. It could also help to track down stolen bikes hundreds of kilometers away.

The slick device fits in underneath your bottle cage using the familiar mounting points. Most importantly, it has no influence on the aerodynamics of a road bike (according to a computational fluid dynamics screenshot from Afterlock’s engineers).

Weight isn’t an issue either, with Afterlock’s device at only 50g. It also conveniently connects to your smartphone via an app. As this airflow simulation shows, the Afterlock sensor has virtually no negative impact on your bike's aero (Photo: Afterlock)
Supplied

A smarter type of bicycle security

When pulling up to a coffee venue or parking your bike outside a shop, the worry of having your bike nicked causes constant anxiety. A simple locking function on the Alterlock can be operated via a button on the device, or remotely via the smartphone app.

Importantly, it can also detect movement or vibrations. When this occurs, an alarm will be set off on the bike’s device and a notification is sent to a selected mobile phone number, informing a recipient that a bike is moving.

The vibration detection system is said to be able to differentiate between swaying on a bike rack and what it considers to be movement dynamics associated with theft. This prevents it needlessly going off when you have your bike on the back of a car, or if it happens to be a windy day. If someone moves your bike when they aren't supposed to, Afterlock's system will ping your Smartphone (Photo: Afterlock)
Supplied

If someone does get away with your bike (alarm screeching), or if you are bike-jacked, the system will ping through its location once a minute via GPS.

Even if it is moved indoors or blocked from any GPS signal, the device can use local WiFi signals to determine an approximate location.

As the device uses Bluetooth, GPS and Sigfox communication, it will transmit its location from hundreds of kilometres away, whereas a standard Bluetooth connection will usually only measure up to 100m. 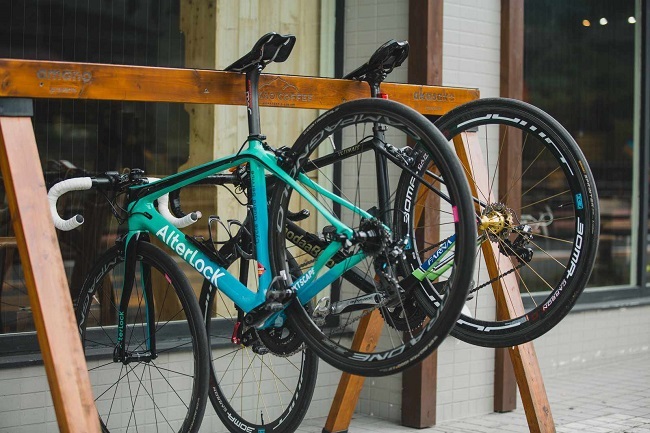 Park your bicycle outside the coffee shop, with complete peace of mind (Photo: Afterlock)
Supplied

Buying you time, to recover that bike

The long-life battery also means this device can continue to transmit for up to two months, giving owners a generous timeframe to track their missing or stolen bicycle.

It would probably be wise to set up the device on more than one Smartphone, in the event your phone and bike are simultaneously removed from your possession. This would allow you to track down your bike from the secondary device.

The second-generation Alterlock has just been released, with the company taking pre-orders. The estimated price is currently R1550.

We live in a world where facts and fiction get blurred
In times of uncertainty you need journalism you can trust. For 14 free days, you can have access to a world of in-depth analyses, investigative journalism, top opinions and a range of features. Journalism strengthens democracy. Invest in the future today. Thereafter you will be billed R75 per month. You can cancel anytime and if you cancel within 14 days you won't be billed.
Subscribe to News24
Next on Ride24
CAPE EPIC 2023 | Training Log 3 - the dreaded indoor trainer