Beyond the call of duty: 5 brave Test match innings 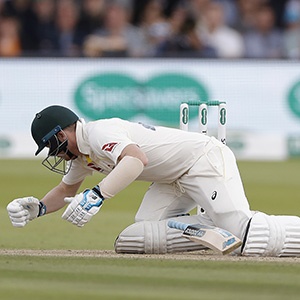 London - Whether or not Australia's Steve Smith was right to return to bat after being hit by a Jofra Archer bouncer during the second Ashes Test at Lord's on Saturday depends on your point of view.

Smith collapsed to the turf after being struck on the neck when on 80 and had to retire hurt.

Yet he still resumed his innings at the fall of the next wicket, before he was out for 92 in Australia's first-innings 250.

AFP Sport looks at five other examples of Test batting above and beyond the call of duty:

Paynter gets off hospital bed to win Ashes

But they sealed their series victory in the fourth Test at Brisbane thanks in part to Eddie Paynter.

The Lancashire batsman developed tonsillitis as the Test progressed, with Paynter admitted to hospital.

But with England in trouble, Paynter got of his sick bed and went to the Gabba ground. He arrived when England lost their fifth wicket on 198, still trailing by 142 in pursuit of Australia's 340.

Following a shower and some eggs, brandy and champagne, he went out to bat and eventually made 83 in England's 340.

The second innings saw Paynter hit two sixes, the second of which brought up the winning runs.

New Zealand's Bert Sutcliffe played 42 Tests without being on the winning side but his courageous 80 against South Africa in the Boxing Day Test in Johannesburg in 1953 remains one of his country's most celebrated innings.

New Zealand were 9-2 when he came in and it was not long before Sutcliffe was hit on the head after missing a hook off a bouncer from fast bowler Neil Adcock.

With blood pouring from a split in his ear, Sutcliffe went to hospital, where he fainted twice more. But he returned after tea, his head covered in bandages.

He shared a last-wicket stand of 33 with tailender Bob Blair, who played in the match despite learning of the death of his fiancee just two days earlier.

Close stands up to the West Indies

England's Brian Close was a famously brave batsman and fielder, who specialised in the danger positions of short leg and silly point in an era where cricketers did not wear helmets.

But even his legendary resilience was put to the test when in 1976, at the age of 45, he found himself opening against a West Indies pace attack led by Andy Roberts and Michael Holding.

On an uneven pitch late on the third day at Old Trafford, Close took a succession of blows to the body as the ball flew off a length but somehow got through to stumps although he could not prevent an England defeat by the huge margin of 425 runs.

McCosker comes back after broken jaw

Australia's Rick McCosker only made 25 runs in the 1976/77 Centenary Test against England at Melbourne.

But he did so with a broken jaw after being struck by a bouncer from England fast bowler Bob Willis.

He came out to bat at No 10 in the second innings, his head wrapped in bandages, to help Rodney Marsh add 54 for the ninth wicket -- an important stand given Australia won by 45 runs, just as they had done when beating England by the same margin 100 years earlier.

Australia's Dean Jones really did risk life and limb when, badly dehydrated, he batted on to score a double century against India in the heat and humidity of Madras (now Chennai) in 1986/87.

When he told Australia captain Allan Border he was ill, his skipper replied: "You weak Victorian. I want a tough Australian out there. I want a Queenslander".

But after eight-and-a-half hours at the crease, Jones was rushed to hospital with Border fearing his words may have helped kill his team-mate.

Jones, however, returned in a match that produced just the second tie in Test history.

We live in a world where facts and fiction get blurred
In times of uncertainty you need journalism you can trust. For only R75 per month, you have access to a world of in-depth analyses, investigative journalism, top opinions and a range of features. Journalism strengthens democracy. Invest in the future today.
Subscribe to News24
Related Links
Smith, Cummins give Aussies chance of victory in 2nd Test
Klaasen replaces Second in Proteas Test squad
OUCH! Steve Smith retires hurt after being hit by Archer bouncer
Next on Sport24
Paine sees 'very exciting era' for Australia