Maharaj: Proteas are no longer a one-man team 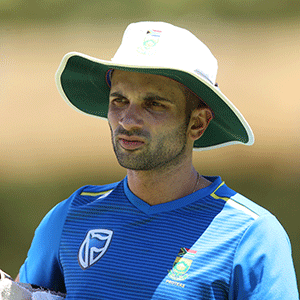 Proteas spinner Keshav Maharaj warned on Tuesday that South Africa are no longer a one man team following their performance in the first ODI at Paarl.

Heinrich Klaasen starred with the bat as he smashed an unbeaten 123 to help the Proteas to a decent first innings score and ultimately a 74-run win.

The Proteas lead the three-match ODI series 1-0 with the second scheduled to get under way on Wednesday in Bloemfontein.

This has been a frustrating season for South African fans as the Proteas have lost four series' out of the five this summer. The only exception was the drawn ODI series against England, mainly due to a rain-affected match at Kingsmead.

Proteas skipper Quinton de Kock has been South Africa's most prominent batsman with none of the others in the top order stepping up.

That was until Klaasen excelled on Saturday and he was well supported by team-mates David Miller (64) and Kyle Verreynne (48).

Maharaj believes that the Proteas have now turned a corner and will not be solely relying on their captain in the future.

"Quinny has been a stalwart of our batting line up but it just shows that the youngsters in our side like Kyle Verreynne, who in his debut match put his hand up and scored some vital runs," Maharaj told reporters on Tuesday.

"Heinrich Klaasen has played a handful of games and showed a lot of maturity in his innings that he played and how he paced himself, made him feel like he has been there for a long time.

"I think we're coming out of the phase when it's a one man team, we play together as a team. Everyone is putting their hand up in various games, which is very important for us going forward."

The second ODI is scheduled to get under way on Wednesday at 13:00.