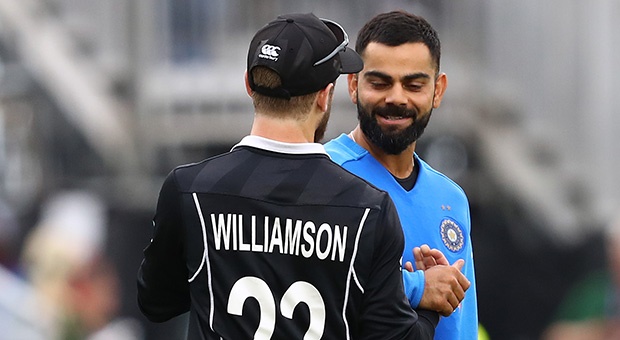 Manchester - The result aside, what happened at Old Trafford on Wednesday was special and the two-day affair turned into one of the most intriguing World Cup semi-finals you could ever hope to see.

New Zealand, thanks to superb opening spells of bowling from Trent Boult (2/42) and Matt Henry (3/37) that reduced India to 5/3 in their run chase, emerged as 18-run winners and booked their spot in a second World Cup final in a row.

The sides had looked on as rain fell for most of Tuesday, meaning New Zealand had to resume their innings on 211/5 (46.1) on Wednesday morning in what became a fascinating two-day ODI with everything on the line.

While the Indian players and fans were both gutted, there was an acceptance that the classic that had unfolded meant more.

Indian skipper Virat Kohli, once again, showed his class in the immediate aftermath.

There were no excuses, but rather heartfelt praise for what the Black Caps had achieved.

"That is why these games are called knockouts because if the opposition plays better, you are out of the tournament," India's leader offered.

"We have to accept that.

"I think we are sad, but we are not devastated because of the kind of cricket that we played in this tournament. We know where we stood as a team and today, we were not good enough and that is the nature of this tournament."

Over the years, Kohli has emerged as not only one of the best batsmen of his generation, but also one of the finest leaders.

When India were in South Africa for three Tests back in 2018, they were made to play on some questionable wickets that were prepared to aid South Africa's fast bowlers but instead came across as embarrassing.

The Wanderers strip for the third Test almost saw that match abandoned mid-Test.

Not once, though, did Kohli use the wickets as an excuse for his side's series loss.

He may come across as overly confident and competitive on the field, but that is a symptom of players with this much ability and the high standards that accompany that talent.

Kohli was visibly distraught in Wednesday's post-match press conference, but he held his head high and answered every question from a sometimes-bloodthirsty Indian media contingent with eloquence, humility and class.

When the presser was done, some of those very same journalists who had just quizzed the captain were asking him to autograph bats and shirts, and Kohli obliged.

Williamson, meanwhile, is a different kind of leader.

He obviously doesn't have the superstar appeal of Kohli - nobody does - but he remains one of the most consistently performing batters in world cricket in both red and white ball cricket.

Williamson has scored 548 runs at an average of 91.33 at CWC 2019, but more than that he has been a calming, composed leader with the soundest cricket mind throughout.

Like Kohli, Williamson was superb at his press conference.

"Obviously, the passion for the game in India is unrivalled and we are all fortunate to play this sport and have a country like India be right behind it," he said.

"There's obviously a huge amount of respect for India as a cricket side and I certainly hope that their fans are very much behind them and respect that the game of cricket can be a tough one on a number of occasions."

Sitting there listening to the two leaders, both at the top of their game and easily the most important players in their teams, it was impossible not to think of where the Proteas were heading.

Faf du Plessis has, for the most part, ticked all the same boxes.

He may not be at the same consistent level of performance as Kohli or Williamson, but he has always led by example and been a figure that the rest of the squad can look up to.

He has set the standard when it comes to performance and work ethic.

If he is done with ODI cricket, though, then the Proteas must look elsewhere, and they will almost certainly have a different captain at the 2023 World Cup in India.

That becomes concerning when you look at figures like Kohli and Williamson.

Aiden Markram and Rassie van der Dussen keep emerging as the possible replacements for Du Plessis, but both still have so much to learn and prove at international level.

It is not to say they do not have the potential to become the best in the world, but there is still a long way to go.

Du Plessis may end up staying on as captain for the next year or two, suggesting a possible handover period between him and whoever the new captain will be.

Either way, South African cricket is crying out for a new leader who can pick up the baton from Du Plessis and guide this side into a new era.

If the semi-final taught us anything from a South African perspective, it is that the international standard is extremely high in that regard.

We can't all be Kohlis and Williamsons, but the Proteas need to ensure that when their new leader whenever is unveiled, he at least commands the same level of respect from his peers and opponents.