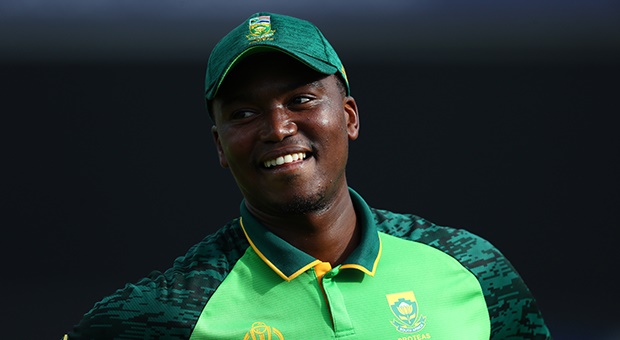 Manchester - "Maybe he is still growing ... you never know."

That was part of Andile Phehlukwayo's answer on Friday to a question on Proteas team-mate Lungi Ngidi's continued struggles to stay fit.

It was an answer met with laughter from the South African press at The Riverside in Chester-le-Street, but the seriousness of the situation itself is obviously no laughing matter.

Ngidi, considered one of the brightest young prospects in South African cricket, has endured a nightmarish maiden Cricket World Cup in England and Wales.

An injury concern heading into the tournament with a side strain that saw him ruled out of this year's IPL, Ngidi was then back in the doctors' rooms after just South Africa's second game of the competition when he picked up a hamstring injury.

He is unlikely to play in South Africa's final match of the World Cup against Australia in Manchester on July 6, meaning that Ngidi will have bowled in just four of South Africa's nine pool matches.

Considering that Dale Steyn was ruled out mid-World Cup without bowling a ball, Ngidi's injury was a massive blow to the Proteas' chances.

Even when he did play, Ngidi wasn't at his best and while he did pocket 7 wickets at 30.14, he did so at 6.39 runs to the over - more expensive than every South African bowler at the World Cup with the exception of JP Duminy.

Ngidi's pace has been down, and his lengths have not been consistent.

"After the previous game I just felt that Lungi's fitness, as I said after the post-match, I just feel like he was a bit under pace," said skipper Faf du Plessis after Friday's meaningless 9-wicket win over Sri Lanka.

Du Plessis was explaining his decision to go into that match without Ngidi, opting instead for allrounder Dwaine Pretorius, who put in a man-of-the-match performance of 3/25 (10) to set up the South African win.

There is obviously nothing left to play for at this tournament for the Proteas, but life after the World Cup is where the focus now sits.

With the likes of Steyn, Imran Tahir, JP Duminy and Hashim Amla nearing the end of their careers, the Proteas are in need of young blood to take the side forward in all formats.

Ngidi is crucial to that cause given the immense promise he has shown in his short international career so far.

Injuries, however, continue to haunt him and Du Plessis has acknowledged that it is an element of Ngidi's game that needs to be rectified.

Ngidi is naturally a physically imposing character, and you'd probably think 'boxer' more than 'cricketer' at first glance, but he has put in an incredible amount of work into getting lean, in shape and up for the demands of international cricket.

It hasn't worked out, though.

Before the side strain and hamstring injury, there he picked up a serious knee injury in Australia towards the end of 2018 while the start of his international career was interrupted by a peculiar abdomen injury that lingered for longer than expected.

At 23, the future is bright for Ngidi, but he does need to find optimal fitness and sustain it if he is to cash in on the potential.

"Personally, I think he has just been unlucky at times and it can happen to anyone," Phehlukwayo added.

"I look at a player like Pat Cummins who was injury-prone for quite a while before his peak.

"That was also unlucky for him, but for him to show the skill and talent that he has now is unbelievable."

The example of Cummins should provide Ngidi with encouragement.

Now 26 and considered one of the best fast bowlers in world cricket, Cummins spent over five years on the sidelines after making his Test debut against the Proteas as an 18-year-old back in 2011.

His 6/79 in the second innings of that Wanderers Test set up an unlikely Australian victory, and almost immediately the world took notice of the teenager.

A back stress fracture changed all of that, however, and it was followed by a series of other serious injuries that threatened to end Cummins' career before it had even begun.

Ngidi, technically fit and available for selection, is not being threatened at that level yet.

His injuries are minor in comparison and there is no reason to panic, but not being able to get through a World Cup should ring the alarm bells.

"It's something that he is working on and it will come right," said Phehlukwayo.

"He is trying to get stronger mentally and physically and I personally hope that there will be no more injuries coming."

Saturday's match against Australia gets underway at 11:30 (SA time).