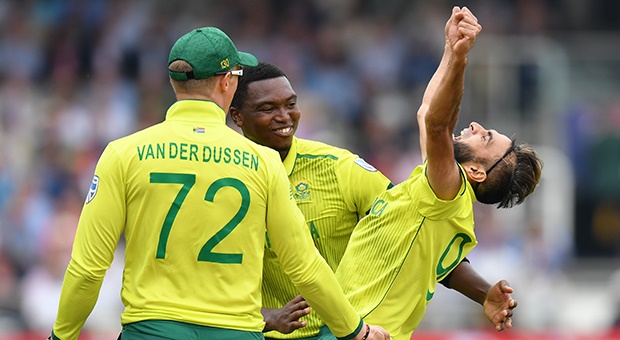 Cape Town - Gone … officially eliminated now (a mercy killing?) from what cannot, statistically, be anything but their lousiest ever Cricket World Cup campaign from here.

Even consolation victories over each of remaining foes Sri Lanka and Australia would only drag South Africa’s win percentage at the 2019 tournament to 33.33%: three wins from nine.

But right now it stands at an abject 14.28%, courtesy of the latest fiasco at the hands of previously similarly labouring Pakistan at Lord’s on Sunday … or one victory from seven fixtures, albeit that there’s been one no-result from a game against West Indies they’d already started on the back foot at the crease before the weather intervened.

That figure is immeasurably lower than it has ever been for them at the World Cup; the previous worst was a 50% win strike rate at the 2003 home-staged event.

From the moment the Pakistani openers, Imam-ul-Haq and Fakhar Zaman, started slapping around the Proteas’ much-vaunted new-ball attack of Kagiso Rabada and Lungi Ngidi after opting for first strike, it became increasingly difficult to see this muted, lamentably uninspiring SA crew finding the necessary chutzpah to get the job done.

They just seemed to be playing catch-up an awful lot of the time: it has been the case for so much of the tournament, where South Africa, so inexplicably, have seemed suspiciously behind too much of the planet for enterprise, innovation and urgency.

Captain Faf du Plessis cut an animated figure in the first couple of hours at the prestigious home of cricket, doing his all to gee up his men, getting them into motivational huddles whenever he could and, later on, showing his own seniority purely in a cricketing sense with a fighting, top-scoring innings of 63 before he perished to a rash, desperate stroke in the formidable chase that became a lost cause all too quickly.

But this is a mentally fragile, leaden-footed brigade, and his best efforts at igniting “gees” ultimately came to nought, especially with some of his most revered customers by reputation - a batsman like Quinton de Kock, bowler like Rabada - just looking as if they wished they were somewhere else, rather than campaigning on the highest limited-overs stage.

De Kock’s pure talent has meant this tournament isn’t (thus far, anyway) a disaster for him in personal numbers terms: he has weighed in with respectable innings of 47 on Sunday, plus a pair of 68s against Afghanistan and England, although they also seem so indicative of the fact that desperately few Proteas players are delivering genuinely influential, match-winning performances.

The wicketkeeper cuts a gaunt, strained figure in general body language in England … and much the same applies to Rabada, spitting and glowering his way through the event to this point as if dumbstruck as to why he is so far off the premier pace bowlers strutting their stuff at CWC 2019 for effectiveness in strike terms.

It is unusual for the 24-year-old to be struggling to the extent he is: six wickets from as many bowling innings at a bloated average of 50.83 and strike rate of 58.

Here’s the big frightener, though: for all the carnage going on around him, the Proteas’ 40-year-old senior statesman Imran Tahir has only stiffened his own excellence at the tournament in the last few matches.

Sunday was no different, the leg-spinner being far and away the most penetrative and simultaneously economical of the SA frontline bowlers.

That has been a hallmark of the Lahore-born player – he seemed to revel in the relative hostility he encountered from a hugely Pakistan-heavy crowd at Lord’s – for a long time, really, so it is scary that he pulls the plug on ODI cricket after the World Cup.

No, make that very scary … his stepping down threatens to only expand the girth of the Proteas’ soft underbelly.

Cricket South Africa, whose relative silence through this deepening World Cup disaster has been less than golden, could do a lot worse than try to implore a man who clearly looks after his ageing body meticulously and gets only more determined to counter the ravages of Father Time, to put his 50-overs departure on hold for a little longer.

He is the leading spin wicket-taker at the World Cup so far (no South African is even close to the helm of other significant numbers categories, believe me) with 10.

While it makes sense for the Proteas to empty their “bench” in desperation for some sort of freshening - some semblance of a “way ahead” - in the academic remaining two World Cup dates, putting Tahir out to a pasture that is just around the corner anyway only makes the side look that bit more vulnerable than they already are.

Bottom line: they desperately need to restore a pinch of dignity before they get on that long-haul flight home.

It seems so much less likely without their gnarly old talisman; he’s been one of lamentably few SA figures infused with a spirit of no-surrender.

Yet soon he’ll be gone.

We live in a world where facts and fiction get blurred
In times of uncertainty you need journalism you can trust. For only R75 per month, you have access to a world of in-depth analyses, investigative journalism, top opinions and a range of features. Journalism strengthens democracy. Invest in the future today.
Subscribe to News24
Related Links
Overbowled Rabada's World Cup no-show hurts Proteas
Faf: Proteas results are becoming 'embarrassing'
OUT! Proteas' CWC misery over with Pakistan defeat
Next on Sport24
Petition to have 2019 CWC shared rejected