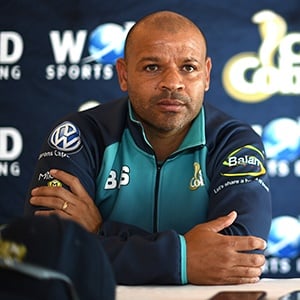 Cape Town - Cape Cobras coach Ashwell Prince has challenged the leadership at Cricket South Africa (CSA) to stop "beating around the bush" when it comes to the continued loss of players to lucrative offers abroad and Kolpak deals.

Prince confirmed to media at Newlands on Friday that promising 25-year-old batsman David Bedingham had left the Cobras, signing a one-year deal with English county side Durham.

The deal is thought to have been rushed with Friday being "deadline day" before Brexit takes full effect.

"For everyone that leaves, it's about opportunity and about uncertainty. Same old, same old," Prince said in a familiarly open, honest and refreshingly blunt press conference ahead of his side's One Day Cup opener against the Warriors on Sunday.

Prince added that he and the franchise had "tried everything" to convince Bedingham to stay.

"My honest opinion is that he's got a better chance of playing international cricket for South Africa if he stayed," Prince said.

"Ultimately, you don't know what's going on in a player's head.

"I don't think David Bedingham is going to struggle to get a contract at this level - franchise or county cricket. Where does he have a better chance of playing international cricket? I think that's here."

Prince's view on players who leave South Africa is that it is not always a great loss to the national side.

"Not every Kolpak player is going to strengthen the Proteas," he said.

Prince pointed to the example of former Proteas spinner Simon Harmer, who has been one of the standout bowlers in county cricket since joining Essex in 2017.

"Who is to say that the county cricket standard is higher than our local standard?" Prince offered.

"I played there for quite a few years, so I have a fair understanding of what the standard is like there compared to here.

"I was there at nearly 40 years old with a little 'boep' and scoring more runs than anybody else in the country. It's no great shakes, county cricket. It's just the same as here.

"If Simon Harmer is taking a lot of wickets there, but Dane Piedt has taken more wickets than him in the same season here, then who is doing better?

"We don't know Dane Piedt would have taken 60-odd wickets in a season bowling at Essex, because he hasn't been given that opportunity.

"Is Simon Harmer a better bowler when Piedt took more wickets than him here? Dane Piedt is the highest wicket-taker ever in South African domestic competition as a spinner. That's a fact. So, let's talk about the facts."

Another aspect to consider, Prince says, is how many opportunities at first-class level get wasted on players who ultimately leave South Africa.

Sitting alongside their coach on Friday were Kyle Verreynne and Zubayr Hamza - two young Cobras who have now broken onto the international stage.

"As a coach you have players who can do exactly what a Stiaan van Zyl and a Dane Vilas did for the Cobras, and possibly more, so who does that opportunity go to?" Prince said.

"We had five or six youngsters that could go all the way, and if the Kolpak players were still playing for the Cobras, then those guys would still be playing semi-professional cricket and they're better than that."

The onus was on CSA, Prince said, to firmly tackle the issue of why South African players were leaving.

"It's high time that CSA sits down and looks at these things a little closer and don't beat around the bush about why people are leaving," he said.

"Get to the crux of the matter about why people are leaving, face it and confront the brutal facts. That's where we're at.

"I have a good understanding about why he (Bedingham) left and I'm sure if anybody up there at CSA level had the opportunity to leave then they would understand why he is leaving. Let's not beat around the bush when it comes to that.

"It's 1% of people who play cricket that can play at the highest level. If you're losing all of your one percenters, then what are you left with?"

The Cobras' clash against the Warriors on Sunday starts at 10:00.

We live in a world where facts and fiction get blurred
In times of uncertainty you need journalism you can trust. For only R75 per month, you have access to a world of in-depth analyses, investigative journalism, top opinions and a range of features. Journalism strengthens democracy. Invest in the future today.
Subscribe to News24
Related Links
India snatch another super over victory against NZ
Australia U-19 cricketers face sanctions for mocking fans
Gayle takes his big hitting to Nepal's T20 league
Next on Sport24
There is no limit to what this England team can do - Morgan