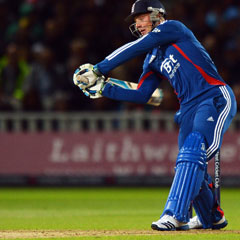 New Delhi - A blistering half century from Jos Buttler helped England post a commanding 171 for four against holders Sri Lanka Saturday in a must-win match at the ICC World Twenty20.

Wicketkeeper Buttler smashed 66, including eight fours and two sixes in a 37-ball knock, providing some much-needed firepower at the tail-end of the England innings who are seeking to secure their place in next week's semi-finals.

He and skipper Eoin Morgan (22) put on 74 in a brutal fourth-wicket partnership as Sri Lanka's bowlers struggled to contain the onslaught at New Delhi's Feroz Shah Kotla stadium.

Rookie spinner Jeffrey Vandersay was the pick of the Sri Lankan bowlers, taking two for 26 in an economical four-over spell in which he took the wickets of both Jason Roy and Joe Root.

England got off to a poor start when Alex Hales, back in the team after a back injury, was adjudged lbw off the bowling of the veteran Rangana Herath with only four on the board.

But powerful hitting from Roy, who made 42 off 39, and Root (25) began to turn the match in England's favour before Buttler then stepped on the accelerator.

A victory for England would guarantee their qualification for the semi-finals and they are likely to be drawn against the unbeaten New Zealand in New Delhi on Wednesday.

Sri Lanka would crash out of the tournament if the lose to England after the West Indies ensured their qualification from Group 1 on Friday night by beating South Africa.