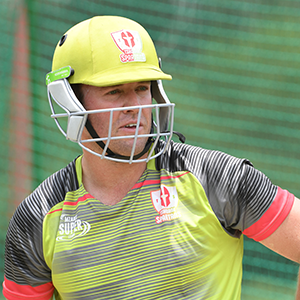 Cape Town - AB de Villiers is enjoying his Mzansi Super League (MSL) experience with the Tshwane Spartans this season, saying he was pleased to be part of a such a good group of players as they prepare to step up their bid to reach the play-offs on Friday.

The Centurion-based outfit welcome the log-leading Paarl Rocks to SuperSport Park for the clash, with victory for the unbeaten host a must if they want to stay in the hunt for a direct ticket to next month's final.

The Spartans are currently third on the table after beating rivals the Jozi Stars in their derby clash on Sunday. Their 14 points are five fewer than the Rocks and second-placed Nelson Mandela Bay Giants (both 19).

Former Proteas captain and star Tshwane batsman De Villiers is happy with their latest result over the weekend.

"We're a very competitive group at the Spartans this year and it was great to see in the last game, and in others too, that when you give us an opportunity everyone gets stuck in," he said. "It was a very good win against Jozi Stars in the last game."

Last year De Villiers captained the Spartans, but they endured a miserable campaign by finishing second bottom on the table.

Mark Boucher's side have looked a transformed unit under the leadership of Heinrich Klaasen. This despite the rain doing its best to derail them - three of their five games have been no results.

"The rained out games certainly didn't help us," De Villiers, who has appeared more relaxed since relinquishing the captaincy, adds. "When we hopefully lift the trophy in a few weeks' time we'll may be look back and say they did help us, but certainly when you work so hard to prepare, you just want to get out there and win games of cricket.

"Then the rain comes and that's really frustrating, three out of four I've never experienced that in my life before.

"We're a group of competitive guys, we just want to play cricket and win games.

"It was quite tough from a management point of view right down to the some of the players who haven't had a game yet, all really nice guys who are prepared to go the extra yards for the team.

"That's what I mean by competitive group and that's why I've enjoyed it so much."

De Villiers did get his MSL season going in the last game by recording his first half-century of the competition.

Another man that excelled in the last game for his team was Rocks' all-rounder Ferisco Adams. He claimed an impressive two for 27 bowling at the death and also struck a priceless unbeaten 23 to propel Paarl to an all-important win over the previously table-topping Giants.

The 30-year-old, who has only played two out of the six games so far for his side, admits that confidence is high within their ranks, adding that they will be hoping to continue the momentum in Tshwane.

"We were very pleased after the last win," he stated. "To go to Port Elizabeth and beat the Giants, who were previously unbeaten, we're very happy with that.

"They are the form team in the MSL and they are the team to beat, so it was very nice to beat them at home and it's a very good confidence builder for us going forward in the competition.

"Hopefully we can go to Pretoria now and get another win there. We're improving all the time and the confidence is good at the moment."

We live in a world where facts and fiction get blurred
In times of uncertainty you need journalism you can trust. For only R75 per month, you have access to a world of in-depth analyses, investigative journalism, top opinions and a range of features. Journalism strengthens democracy. Invest in the future today.
Subscribe to News24
Related Links
Brooks, spinners put West Indies on top in Afghanistan Test
To the rescue: Sport24 steps in to pick Proteas Test XI
Team demands action if Gayle fails to show up for BPL
Next on Sport24
Cameron Delport headlines revamped Mzansi Super League mini-draft