Hales the hero as Heat fire in Paarl 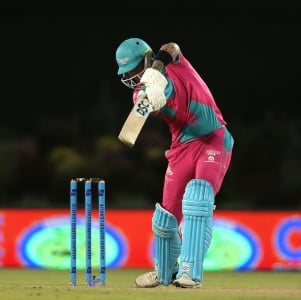 Cape Town - Alex Hales struck a terrific 55-ball unbeaten 97 as the Durban Heat brilliantly stayed alive in the Mzansi Super League (MSL) by pulling off a record chase to slay the top-of-the-table Paarl Rocks by six wickets at Eurolux Boland Park on Wednesday.

Twenty-four hours after the Nelson Mandela Bay Giants set the competition record second-innings winning mark of 192 for four, the men from KwaZulu-Natal went five runs better to chase down 196 with seven deliveries to spare.

Englishman Hales was the heartbeat of the chase, clubbing four sixes and nine fours to help his side secure a third successive win and one that lifted them to fourth on the table.

For the Rocks, they dropped a spot on the table from first to second, but still level on 23 points with the Giants, although they only have one match to play, which is against the very same side in a potential play-off decider on Sunday.

But Faf du Plessis and his team will be wondering how they did not nail their position in the top three of MSL 2.0 in front of their home fans.

They batted first after losing the toss and being put in, but that hardly mattered as Cameron Delport powered them to what looked a winning score of 195 for two.

The opener clubbed 84 off 49 balls (10 fours, 3 sixes), an incredible return considering he only batted for a little over half of the innings.

Delport shared in a 52-run opening stand with Henry Davids (14), before adding a further 53 with Du Plessis when he fell in the 12th over.

Hales then dominated the chase with his fine innings, in which he lost Wesley Marshall (13) and Wihan Lubbe (12) relatively early around him.

However, David Miller’s 40 off 22 balls was key to a flying 62-run third-wicket stand, and with extras chipping in with 19, the Heat had more than enough to eventually coast to an eventual 197 for four in 19.5 overs, sealing a vital win.