Barnes backs SA 'A' side 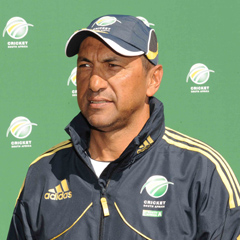 Cape Town - South Africa 'A' coach Vincent Barnes believes Tuesday's match against New Zealand in Pietermaritzburg will be a good chance for his players to further enhance their reputations.

"There are several youngsters in the Proteas T20 international squad and this match will give opportunity for some more youngsters to show their worth," Barnes said.

"There are also players who have represented the Proteas before and they will want to remind the selectors that they are still in the mix."

The 20-over match at The Oval comes four days prior to the opening T20 international between the Proteas and the Black Caps at Kingsmead in Durban on Friday.

The hosts have named four new caps for the three-match series - Henry Davids, Quinton de Kock, Aaron Phangiso and Chris Morris - while Faf du Plessis had been handed the captaincy.

Several of the others in the 12-man squad were coming off impressive showings in the recently-concluded One Day Cup.

Justin Ontong, Stiaan van Zyl and Dane Vilas were key with the bat for the successful Cape Cobras while Hardus Viljoen was one of the stand-out bowlers for the Highveld Lions.

New Zealand have been dogged by the much-publicised axing of batsman Ross Taylor as captain prior to their arrival in the country last week.

The former skipper will not play any part during the tour after making himself unavailable, but coach Mike Hesson was confident they could cope without their star player.

"It’s a very difficult tour ahead, but we’ve selected some very promising youngsters in the squad and we’re looking ahead to the challenge," Hesson said.

He insisted they were not just in South Africa to make up the numbers, saying they would try to win every game, starting with the match on Tuesday.

"You try to win every series you go in to," he said.

"We have three T20s against South Africa and we have got an exciting squad but it is important that the guys have the chance to go out there and express themselves.

"If we do that well, we will certainly be putting South Africa under pressure."