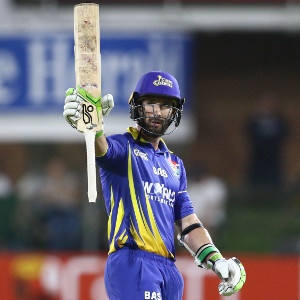 Cape Town - The Cape Cobras won the battle to host the second One-Day Cup semi-final after Pieter Malan's unbeaten 94 helped them to a 10-run Duckworth/Lewis win over the Warriors in their final league phase encounter in Port Elizabeth on Friday.

With the final four already decided prior to the game, the only remaining prize on offer was the right to stage the second semi-final and they sealed that despite some late jitters at St George's Park.

Malan, though, kept his composure through his 131-ball vigil that yielded just four fours but did the job for his side, whose total of 249 for seven in 46.5 overs was ahead on par scores, in their pursuit of a 265-run target.

The Warriors had set their challenging mark thanks to Gihahn Cloete's excellent unbeaten 120 (138 balls, 8 fours, 5 sixes), the second List A three-figure score of his career and second of the season.

Colin Ackermann hit 45 and Clyde Fortuin 36 to give the home side a strong finish. Dane Paterson was the best of the bowlers with two for 46.

The Cobras then made light work of the chase, particularly for the first 37 overs when they had reached 200 for three.

Malan was the mainstay, but there was good support in that period from George Linde, who blazed his maiden half-century at this level with a score of 74 (55 balls, 8 fours, 2 sixes).

But it nearly went wrong from there as Jon-Jon Smuts picked up three for 49.

However, Malan kept his cool to leave them ahead of the run rate when rain arrived before the end.

The Cobras will now go on to host the Dolphins in Cape Town on Wednesday, with the Warriors to meet the Titans in Centurion on Tuesday.