CSA to wait on BCCI 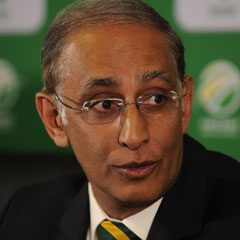 Haroon Lorgat (Getty Images)
Dubai - CSA chief executive, Haroon Lorgat, and his counterpart at the Board of Control for Cricket in India (BCCI), Sanjay Patel, have met in Dubai on Monday evening to consider India’s tour to South Africa later this year.

The meeting was arranged between the two boards following concerns raised by the BCCI around the schedule that was released by CSA.

"I am happy to say that we had a constructive meeting and I would like to thank Sanjay for his friendliness and support in trying to find a way forward," commented Lorgat.

"After listening to Sanjay, it is clear that we will now have to wait for the BCCI’s AGM to be completed before any tour schedule can be confirmed.

"It is key for all of us to make sure that the good relationship between our respective boards is maintained and, in fact, strengthened and that we also honour the proud history between our two countries," added Lorgat.

"Our board presidents are also in discussion and we will now arrange for them to meet soon after the BCCI AGM."

CSA would like to thank its fans, key stakeholders, commercial partners and the media for their patience and support in this matter.

CSA has further reiterated that no further comments will be made until after the BCCI AGM on 29 September 2013.