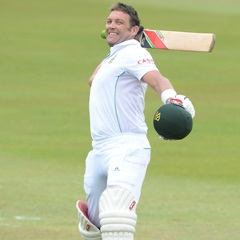 Jacques Kallis (Gallo Images)
Cape Town - Jacques Kallis has been included in the Proteas T20 squad for the challenge match against the Springboks that will be the cricket highlight of the opening day of the Cell C Festival of Cricket at Newlands on Friday.

The sponsors also announced on Wedneday that they will be donating R10 to the Jacques Kallis Scholarship Foundation for every run that Kallis scored during his Test career. This amounts to R132 890. The cheque will be presented to Kallis during the innings break on Friday.

“The nation owes him so much, not just for his performances as a world-class cricketer over an extended period of time but for the role model he has been to our youth that stretches far beyond the game of cricket.

“The Foundation is something that is very close to his heart and he may have retired from cricket but we all know that he will continue to work tirelessly to create the opportunity for young South Africans to gain the priceless gift of a good education and the chance to live their cricketing dreams.

“Cell C is delighted to be associated with this project and we hope our contribution will inspire others to help less privileged members of South African society.”

Players marked with an asterisk will not be playing on medical grounds but will be present.