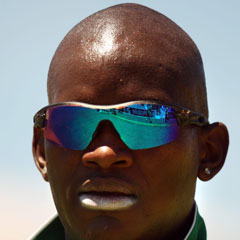 Johannesburg - After a two-and-a-half year absence from the Proteas Test squad, left arm quick Lonwabo Tsotsobe says he is eyeing a return to the South African cricket lineup.

Tsotsobe said he believed playing for the Lions would help him step up his performance and put his name in the hat for selection.

"Their four-day cricket in particular caught my eye, and seeing that I want to get back into the Test side, it's probably the best franchise to come to," Tsotsobe said on Thursday before his Lions left for India to play in the Champions League Twenty20.

"I need to get in game time, as much as I can. We all know we get selected based on our performances.

"If I perform I'll probably get back in the Test side."

Tsotsobe, who endured a lot of criticism last season, said he was determined to prove his critics wrong.

The fast bowler said he welcomed the criticism, as it made him push harder.

"When people talk negatively about you it somehow puts something in your mind that makes you push harder and try and prove them wrong.

"You also need to keep in mind that not everyone is going to say good things about you.

"You just need to focus on doing what you do best.

"When people say anything negative about me, I try to take it as a positive.

"They're probably seeing something I don't see."