JP Duminy (Gallo Images)
Cape Town - Is JP Duminy ready to take charge, in the fullest sense and perhaps a little belatedly, of the No 6 spot in the Proteas’ Test team?

The answer to that question - ideally in the looming three-Test series at home to Australia - could also determine whether the national team not only retain their pack-leading lustre, but feel comfortable returning to a situation in the longer term in which a more conventional “six batsmen” formula takes root once more.

When Gary Kirsten was coach not too long ago, the Proteas had the luxury - and Kirsten himself was not afraid to quite gleefully trumpet it - of being possibly the only top-tier team on the planet to put out seven truly recognised batsmen, while still boasting four specialist bowlers plus Jacques Kallis as a credible fifth option even at his advanced age.

But metronomic all-rounder Kallis has gone, as if in the click of the fingers, and the issue of rebalancing the side has unsurprisingly taken centre stage in pub debate (not to mention down more sober corridors than those) ever since.

Less than a day out from the national selectors revealing their squad hand for the Aussie series, wisest money still seemed to indicate that bowling all-rounder Ryan McLaren - though it was by no means cut and dried - would step into the Kallis hole, potentially operating at No 7 and quite obviously requiring the more accomplished batsmen ahead of him to step up their games and, in some cases, hike their actual berths in the order as well.

Should that formula take shape in the first Test at Centurion (February 12-16), it won’t be every critic’s cup of tea, because a school of thought still has it that the Proteas should stick to the relative sanctuary of seven batsmen - particularly given the stripping from the brew of Kallis’s juggernaut 55-plus average - and employ four specialist bowlers with Duminy offering his off-spin as the fifth element to the attack.

But should McLaren be earmarked for a return to the Test side for the first time since January 2010, the spotlight will only train itself more forcefully on the thinner premier batting armoury to measure up adequately.

In that regard, and assuming that the dogged Faf du Plessis is asked to fill the gigantic Kallis shoes at No 4, Duminy’s ability to deliver consistent enough runs in Test whites in the bridging No 6 slot could come under renewed scrutiny.

The 29-year-old certainly seems as though he has been around for a long time - and that may be in no small measure because he serves his country rather more commandingly in ODIs and Twenty20 internationals - but still only sports 21 Test caps after earning his unscheduled but then near-fairytale debut series against the very Aussies in their own environment in late 2008.

He will ruefully remind you himself that further expectation on him was going to be almost unbearable after that famous, match-turning 166 at Melbourne to secure the historic series spoils ... and he has subsequently had what might be described as a mixed “flight” in the Test arena: no lack of turbulence, interspersed with some quite agreeable patches of sunshine.

He has sometimes looked a million dollars as a stroke-player, but then at other times wrestled demons like quality off-spin against him (think Graeme Swann) and sporadic difficulties against really blinding, snarling pace.

The bottom line is that his Test averages currently stands very much in “jury out” territory at 32.88; it is the kind of stat that makes you think No 7 might just be a more suitable station for him against South Africa’s stronger foes.

He has performed a bit too fitfully for his country in the five-day format - albeit not at all helped by that freak, warm-down Achilles tear in Brisbane last season which set him back both physically and mentally - and there have been some violent trough periods, for sure.

One came between March 2009 and February 2010, when he went 11 Test knocks (all against Australia, England and India, the current, much-discussed “big three” in the world in commercial terms) in which he could only muster 136 often jittery runs at an average of 12.

Then again, those who have seen him play more regularly than others will also argue with conviction that Duminy’s best time may be yet to come and that on the grounds of pure, natural ability he could even prosper in the traditional old Kallis position in Tests if given a good run and some reasonable element of favourable fortune.

Still, as Australia prepare to head this way to begin their series preparation next week, the little Cape Cobras favourite cannot be considered to be in his most vintage touch.

The handful of games he has played for his franchise in the Ram Slam T20 Challenge have seen mostly workmanlike rather than “wow” knocks from his blade, whilst he will enter the SuperSport Park encounter knowing that his last five Test innings have produced a top score of 28 and four single-figure innings.

Not far off his 30th birthday in April, Duminy can decisively turn a corner as far as his Test career is concerned in this hotly-anticipated three-game scrap with the old southern hemisphere enemy.

He is at a bit of a crossroads in the premier arena, but a personal gut feel is that he may yet dodge the rocky dirt-track and find the autobahn, as it were. 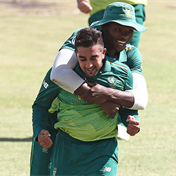