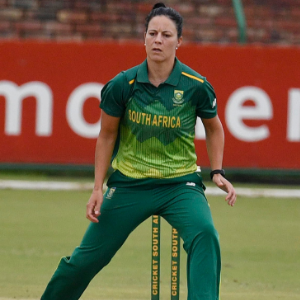 Cape Town - Marizanne Kapp will become only the third South African woman to play 100 One-Day Internationals for her country when the Proteas take on Pakistan in the first of three ODIs starting at Senwes Park Stadium on Monday.

The twenty-nine-year-old, bowling all-rounder debuted against the hosts at the 2009 ICC Women's World Cup in Australia. Since then, she has taken 109 wickets with best bowling figures of 4/14 and scored 1 708 runs with a high score of 102 not out.

Looking back on her career so far, her growth as a player and the women's game as a whole, Kapp said

"It's a massive honour and privilege. It's something you dream about when you're younger. My first dream was to just play for my country, never mind a hundred ODIs. It's especially special when you look at where we first started to where women's cricket is now, so I'm really excited for the match and hopefully it goes our way.

"The way I first started off, coming into this team, I was a bit nervous and I lacked a bit in training if I look at the way I train now. Where we are now as a team is really special, I've made lots of special memories along the way, the biggest one being when we reached the semi-final of the World Cup in England and hopefully before I retire we can do it again."

With 100 caps soon to be under her belt, Kapp still has some big and small ambitions for her career.

"It's everyone's dream to win a World Cup, so that would be number one on my list, but personally, I think batting wise I can still offer a lot more to this team, so hopefully this year I can turn that around and contribute a bit more," she explained.

"It's a bit sad that I've played 100 ODIs and I've never played a single game at home (in Port Elizabeth). I've been playing for South Africa for the last ten years and I've not played one game at home so not everyone has seen me play, but hopefully in the near future I can play one game at home before it's time to retire."

Interim Proteas captain, Suné Luus said she is proud to play alongside a player as dedicated to her craft as Kapp. She made glowing remarks about her teammate’s work ethic and shared the team’s excitement for her milestone.

"Kappie (Marizanne Kapp) is in a league of her own," Luus gushed. "She's one of the older players but she's the fittest of us all and works harder than anyone out there to hone her skills. She's an incredible leader and sets a great example to the youngsters and only asks that everyone else be as dedicated as she is.

"When she steps onto the field, every single player going on with her knows that she's got this and she can't do anything wrong. She's a player that's inspired a lot of people in South Africa and around the world and to be on the field with her when she plays her 100th game is a pretty special thing for all of us. I hope it's gonna be a good day and a special moment for her as well."

Team coach Hilton Moreeng was equally generous with his assessment of Kapp.

"As a youngster she was always very dedicated and very proud to represent her country. She's always been one of those players who was very driven to achieve as much as she can with her team. Her dedication and work ethic and how she’s always carried herself has seen her always give 200 percent to her country and help those around her to make sure that they maintain the standard that she has set.

"For us as a nation, we've been very blessed with a player like that, of her calibre. She's always carried herself with pride and a determination to leave a lasting legacy for herself and her country. A lot of youngsters have been following in her footsteps and she's been very helpful when it comes to that. She's got a very good cricket brain and makes a point of sharing what she’s learned around the world when playing and representing her country.

"She's a player that never compromises on her standards and believes that South Africa is a team that should be winnings World Cups or should be ranked in the top two in world cricket because of the quality that we have. It's really been a pleasure working with a player of her calibre."

"Congratulations to Marizanne on reaching this significant milestone. She is one of the all-time greats of South African women's cricket, not only having played in 100 ODIs but having taken more than 100 wickets and having also been one of the top ranked bowlers for an extended period of time.

"We are extremely proud of her and know that she will continue to represent the Proteas with distinction," Moroe concluded.