Elgar on Gabba 'green mamba': 'I don't think it was a very good Test wicket' 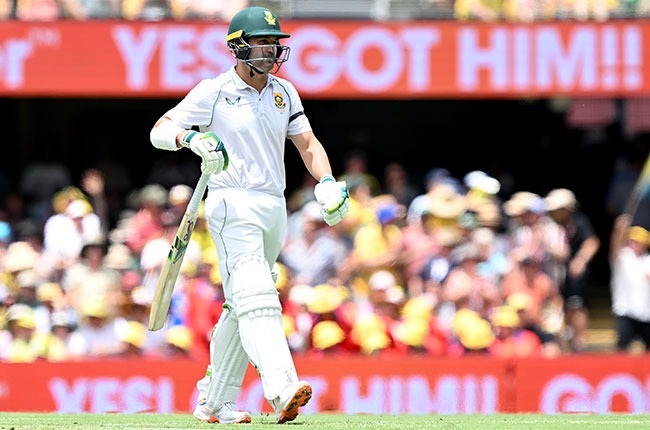 With a Test match over inside two days, questions will always be raised regarding the Gabba pitch, as was the case following the Proteas' 6-wicket defeat to Australia in the opening Test on Sunday in Brisbane.

Thirty-four wickets fell in under six sessions as the Proteas could only muster scores of 154 and 99. Only Kyle Verreynne, Temba Bavuma and Khaya Zondo spent any substantial time in the middle.

Following the match, Proteas captain Dean Elgar acknowledged that it was a one-sided encounter, but when questioned regarding the quality of the wicket at the Gabba, Elgar didn't hold back his opinion.

"You have got to ask yourself the question, is that a good advertisement for our format [Test cricket]," Elgar said.

"34 wickets in two days... [it's] a pretty one-sided affair, I would say. So I think that kind of leads into what everyone is thinking, actually.

"I am a purist of this format and you want to see the game go to 4-5 days.

"Just the way, the nature of how it started to play with some seriously steep bounce with the old ball, I mean, you are kind of on a hiding to none as a batter.

"If you think about it, only two batsmen, maybe three batsmen, applied themselves half-decently and scored runs. So, I don't think it was a very good Test wicket, no," Elgar told reporters.

When questioned regarding the wicket's overall safety, Elgar said he had raised that point with the umpires.

"I did ask the umpires when KG [Rabada] got [Travis] Head out down leg," said Elgar.

"I said, 'How long does it go on for till it potentially is unsafe?'.

"Nortje was also bowling those short ones that were flying over our heads. I know the game was dead and buried; it was never to try and change or put a halt to the game, but that's obviously where the umpire's discretion comes into play, not us as players. It's a tough one to answer, really."

The Proteas now head to Melbourne for the Boxing Day Test starting on 26 December, hoping their batters show more application, no matter what type of wicket they face.

We live in a world where facts and fiction get blurred
In times of uncertainty you need journalism you can trust. For 14 free days, you can have access to a world of in-depth analyses, investigative journalism, top opinions and a range of features. Journalism strengthens democracy. Invest in the future today. Thereafter you will be billed R75 per month. You can cancel anytime and if you cancel within 14 days you won't be billed.
Subscribe to News24
Next on Sport
Luus hopes Proteas make history at Women's World Cup: 'Hopefully, this year is our year'