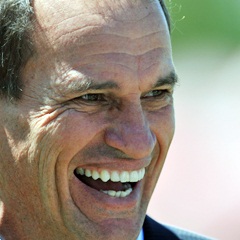 Cape Town - Former South African cricket captain Kepler Wessels says the return of Faf du Plessis was vital to the Proteas’ cause in the second Test against England in Nottingham.

Test captain Du Plessis missed the first Test at Lord’s due to the birth of his first child as the Proteas, led by Dean Elgar, lost by 211 runs.

But the team rebounded upon Du Plessis’ return by crushing England by 340 runs in the second Test at Trent Bridge.

“The Proteas looked like a different team to the one that was well beaten by England during the first test match at Lord's. All credit must go to Faf du Plessis for this victory. His absence was clearly visible at Lord's during the first test where the Proteas looked lost. Upon his return to the test team he selected the right combination, restored a professional, calm approach and led from the front like he always does,” Wessels wrote in his regular column for supersport.com.

Wessels was also happy with the Proteas' team selections for the second Test.

“The selection of four fast bowlers for the second test was absolutely the right decision. This strategy gives South Africa a varied and balanced bowling attack with four quick bowlers and the impressive spin of Keshav Maharaj. Du Plessis now has enough bowling options at his disposal. This is the way forward for the team. The elevation of Quinton de Kock in the batting order was also a good move.”

The third Test at The Oval in London starts on July 27, with the fourth and final one starting at Old Trafford in Manchester on August 4.

We live in a world where facts and fiction get blurred
In times of uncertainty you need journalism you can trust. For only R75 per month, you have access to a world of in-depth analyses, investigative journalism, top opinions and a range of features. Journalism strengthens democracy. Invest in the future today.
Subscribe to News24
Related Links
Up and down England disturb Bayliss
Injured Ballance a doubt for third Test
Spirited Proteas women fall in semi-final thriller
Next on Sport24
Fit-again Rabada expects fight, reverse swing ahead of his return to Test cricket