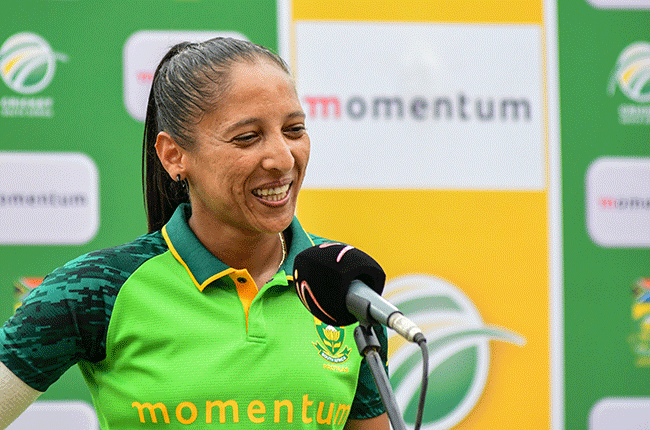 Ismail's brilliance with the ball steered the Proteas women to a 3-0 clean-sweep the ODI series and a 2-1 win in the T20 series at Kingsmead.

The 32-year-old ended the Pakistan tour with 14 wickets, taking seven wickets each in the limited-overs formats.

In the ODI series, Ismail became the fifth South African woman to play her 100th ODI for the Proteas.

However, it was in the T20s where Ismail shone as she became only the fourth woman in T20 cricket to claim 100 wickets in the opening T20.

In the second T20, Ismail sealed the T20 series for the home side with a stunning career-best five for 12.

"She is a star performer," said Moreeng after the Proteas only defeat of the tour on Wednesday.

"I always highlighted that we've been blessed to have her as a cricketer in the country, the skills she has and the experience that she has shown. When the chips were down, she was one of those who would run to the youngsters and give ideas and make sure the team goes in the right direction."

"She is very competitive, she enjoys winning and wants to play each and every game when she is available for our country."

Thanks to her brilliant display in the T20 series, Ismail overtook Australia's Megan Schutt for second place on the ICC Women's T20 rankings.

Ismail is also nominated for the ICC Women's Player of the Month for January. She is joined by fellow team-mate Marizanne Kapp and Pakistan fast bowler Diana Baig.

"She's a great ambassador of this country," said Moreeng.

"To have her in our midst at the Proteas is a great plus because she makes our job, as coaches, very easy because she has played so much cricket and gets along with everyone in the change room."

Her success for the Proteas echoed Ismail's standout performance in the Women's Big Bash League.

Ismail has had a busy summer playing for the Sydney Thunder, as she became the first South African to win a Player of the Match award in a Women's Big Bash League final.

"All the rewards she is getting now is well deserved because of the hard work she has put in. She's been very patient and has been taking each game in her stride," added Moreeng.

"She done well in the Big Bash and those performances rubbed off to this tour so for us. We are very blessed to have her in the team and we wish her many more years."

We live in a world where facts and fiction get blurred
In times of uncertainty you need journalism you can trust. For only R75 per month, you have access to a world of in-depth analyses, investigative journalism, top opinions and a range of features. Journalism strengthens democracy. Invest in the future today.
Subscribe to News24
Related Links
Century partnership steadies Pakistan on rain-hit opening day against Proteas
One Day Cup final moved to reserve day after washout
CSA provides positive update on George Linde X-ray: 'No fracture'
Next on Sport24
New Test skipper Elgar 'epitomises Proteas character' - Biff