Proteas' Sri Lankan tour is all about CWC vision 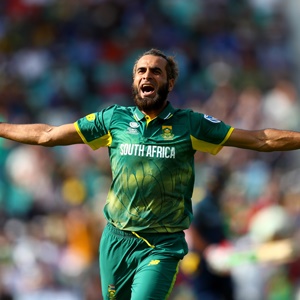 Cape Town - The guilty verdict at the conclusion of the Proteas' trial by spin in the two Tests against Sri Lanka did little to tempt the South African selectors to make last-minute changes to the one-day international (ODI) squad to play the five-match series.

Having left leg-spinner Imran Tahir - who not long ago was the leading bowler in the world in the format - out of the team to Test their spin depth, convener of selectors Linda Zondi said the spin-related carnage in the Test series hadn't convinced them to look for reinforcements going into Sunday's opening game in Dambulla.

"The Test, ODI and T20 teams were selected before, so it never entered our minds to make changes," he said from Sri Lanka on Thursday.

"The formats are quite different and we're quite comfortable and won't change our minds.

"We left out Tahir to look at (left-arm chinaman Tabraiz) Shamsi and (left-arm orthodox Keshav) Maharaj as backup to him, nothing has changed."

With Tahir's position in the team seemingly rock solid even though he will be 40 years old at next year's World Cup, the tricky bit for the visitors in this series is re-establishing the winning feeling - after being thrashed at home by India - and building for said World Cup, or 'Vision 2019' as it has been dubbed.

"The first priority is to win because winning is a culture," said Zondi.

"But it's a thin line because we've got goals in terms of Vision 2019. So the goals in this series are two things - winning, which is standard, and the second is making sure we increase the player pool, identify players and give them roles to help us win the World Cup next year."

An unspoken goal is finding something approaching a replacement for AB de Villiers, who retired from all international cricket in May.

"Before we came here, AB was part and parcel of Vision 2019. The number four batting spot was sealed and all our plans were around that. Everything changed when he retired," said Zondi.

"We've always had a plan B and for that number four spot, we've always had Aiden Markram, JP Duminy, David Miller and Heinrich Klaasen in mind. There is a Proteas after AB and we've won series without him. Will we replace him tomorrow? No, but we need to back the other guys."

The bigger question about De Villiers' retirement is, given that he will continue playing in the Indian Premier League and domestically, which means the selectors will quite easily be able to assess his form, what will be the reaction if he decides to come out of retirement for the World Cup?

"What I've learnt as a selector is that a player can wake up one day and retire, which you need to accept and respect. But when he wants to come back, it can't be my decision alone if he does. If he decides to come back, it's going to include a lot of discussion because it's never about one player," said Zondi.

"The Proteas are a team and we need to look at what that would mean in a team environment, so I can't give you an answer now."

Of course, while the Proteas try to replace De Villiers, they are still trying to fill that troublesome No 7 void rendered by a certain Jacques Kallis when he retired the year before the 2015 World Cup, which is why 20-year-old Highveld Lions all-rounder Wiaan Mulder, who has played one ODI against Bangladesh before, has been called up again despite his superior first-class (as opposed to List A) numbers suggesting he's a better pick for tests than ODIs.

"The one thing selectors never do is look at stats alone," said Zondi.

"He's just scored a 50 and taken a wicket in the warm-up game as we speak. We feel he's got the potential to play well in this format. Primarily, we're looking at the all-rounder position and Mulder is one of the young guys we're looking at."

READ: Steyn set to retire from ODIs after 2019 CWC

Zondi added that Dale Steyn's omission from the ODI squad didn't mean he was done in that format.

"When we looked at him in the Tests, our first goal was that he got back to par. In the first two Tests, he bowled at good pace and finished both, but he took only one wicket, which is not his norm.

"Is he out of the picture? Not at all, not even Vernon Philander, who bowls well in the English conditions, or Dean Elgar has been ruled out. We're just making sure we cover our bases."