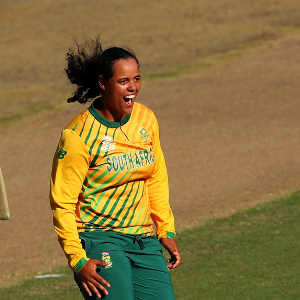 The Proteas finished on top of Group B after taking a point with no play possible against the West Indies on Tuesday.

South Africa have shown signs they've learnt from semi-final slip-ups gone past and Tryon believes they're ready to take on the reigning champions in their own backyard.

"We're pleased with our group stage, we've played really good cricket and the maturity we've shown has been nice to see," said Tyron.

"We've just got to stay in our space. We want to play the world champions, and we've wanted to play them for a while now," she said.

"To face them in a semi-final is probably the biggest game for us."

Dane van Niekerk's side have never beaten Australia in any form of the game, losing in all four of their Women's T20 World Cup meetings and in 13 of their 15 ODI clashes.

The washout in Sydney was a disappointing end to West Indies' World Cup campaign that saw them beat only Thailand and lose to England and Pakistan.