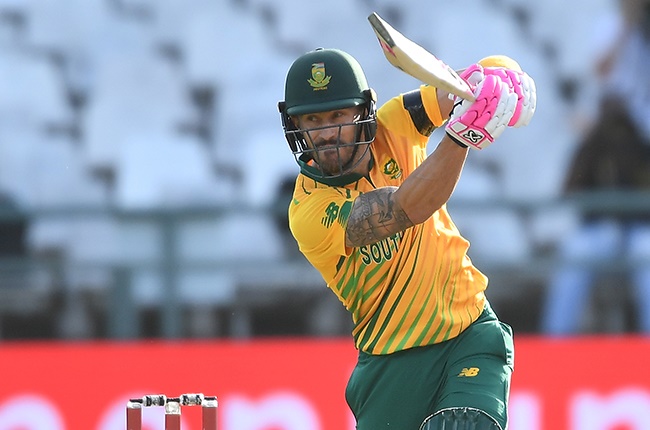 The Proteas threatened to pull off what would have been a somewhat unexpected victory, but in the end composure with the ball let them down as they slipped to a five-wicket loss to England in the opening T20 in Cape Town on Friday night.

It was a bitterly disappointing result for a side that has waited nine months to play international cricket again.

The truth of the matter, though, is that this English outfit knows how to win T20 cricket matches from many different positions, and that proved to be the case in front of an empty Newlands.

It didn't help that Beuran Hendricks (0/56 in 4) went for 28 runs in a horrific 17th over, but there were also other lapses of concentration that hurt the hosts.

Having been put in to bat, the Proteas carded a competitive 179/5 from their allotted 20 overs thanks largely to a classy knock of 58 (40) from former captain Faf du Plessis.

It often looked like that would be enough, particularly in the early stages of the English chase when debutant George Linde (2/20 in 4) helped reduce the South African opposition to 34/3.

Jonny Bairstow (86* off 48), though, had other ideas with a masterclass that ultimately won the match for his side.

Earlier in the day, had there been spectators at the stadium, Du Plessis' knock would have drawn 'oohs' and 'ahhs' from a Newlands crowd that is always festive and equally passionate.

Instead, every sound of leather flying off willow echoed through the empty, lonely stands.

Du Plessis took a little while to get going, but when he did he showed very clearly that he is a man in form and, more importantly, that he still has so much more to offer South African cricket.

Tom Curran travelled for 24 in his second over, thanks exclusively to South Africa's former all-format captain, as the English fielders had to hop over the advertising boards to search for balls that had been swallowed by the vacant seats.

It was an eyecatching knock and one that swung the momentum South Africa's way after a wobble in the first over when Temba Bavuma (5 off 5) was out trying to paddle Sam Curran only to glove through to the keeper in the first over.

Du Plessis and skipper Quinton de Kock (30 off 23) got busy and showed why they are held in such high esteem by their competitors in this format in the Indian Premier League.

De Kock had said at the toss that the wicket looked to be on the slower side of what he had predicted, and that might have explained the cautious start after Bavuma's wicket.

But before long, the Proteas' two most experienced players were rotating the strike and finding the fence and they took their side to 57/1 after the powerplay and brought up their 50-partnership off 29 balls.

De Kock was out when he slapped Chris Jordan to Eoin Morgan at cover, but Du Plessis kept going and he brought up his ninth T20 half-century off just 34 balls after he had been joined by Rassie van der Dussen at No 4.

At that point, the Proteas would have desperately wanted Du Plessis to bat through, but it was not to be and he was out failing to clear the midwicket fence off a Sam Curran bouncer that lacked pace.

Van der Dussen and Heinrich Klaasen then kept the Proteas ticking over and the hosts were well set at 127/3 after 15 overs, looking for a strong finish and to pile on the runs.

Klaasen (20 off 12) played an inventive cameo before edging a Sam Curran bouncer, while Van der Dussen (37 off 28) fell shortly after and, in the end, the Proteas fought their way to 179/6 at the turn in an effort that they would have been largely pleased with.

Debutant Linde was then given the first over of the English innings and it took him just two balls to strike as Jason Roy (0 off 2) slashed at a cut only to edge to De Kock.

Then, in the fifth over, Lungi Ngidi reduced England to 27/2 when he had Jos Buttler (7 off 6) caught after an awful attempt at clearing the ropes before Linde landed his second to remove a sweeping Dawid Malan (19 off 20), who was superbly caught by Kagiso Rabada ar backward square leg.

At 34/3 at the end of their powerplay, the visitors were in trouble as the South Africans looked to go on the squeeze.

Instead, the Proteas were met by Bairstow and Ben Stokes (37 off 27), who combined to put on a run-chasing clinic and 85 runs for the fourth wicket before Stokes cracked a Tabraiz Shamsi long-hop to Linde in the deep.

By then, it felt as if the Proteas had left themselves too much to do, and that ultimately proved to be the case.

What hopes they did have were dashed by that 28-run Hendricks over.

There were certainly encouraging signs, but in the end, South Africa find themselves 1-0 down in the three-match series heading into Sunday's second T20 in Paarl.

We live in a world where facts and fiction get blurred
In times of uncertainty you need journalism you can trust. For only R75 per month, you have access to a world of in-depth analyses, investigative journalism, top opinions and a range of features. Journalism strengthens democracy. Invest in the future today.
Subscribe to News24
Related Links
SABC signs Proteas deal ahead of bumper season
Proteas bat first at empty Newlands in opening T20 as Linde debuts
England-Netherlands ODI series postponed over virus
Next on Sport24
Captain Quinny 'settled' at No 5 ... but what is his best batting position stats-wise?