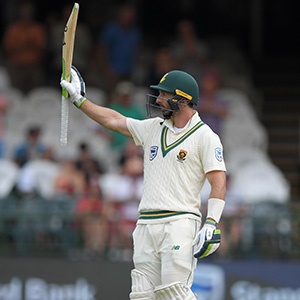 Patience … it’s a virtue Pieter Malan has already shown he possesses at the highest level.

Other attributes have clearly been spotted in him, too.

In an interview with Sport24 earlier this year, veteran administrator and captain of the 1970 South African immortals, Ali Bacher, enthused: “I’m not sure where they found him. He can bat; his technique is outstanding.”

Having made his debut and earned a total of three caps in the four-Test home series against England last season, Malan earned some laurels from visiting English scribes and commentators as well.

But it is also a cold fact that statistically he has no glowing claim yet to an ongoing passage in the national team at five-day level: while he staved off an admirable number of deliveries across those three clashes at Newlands, St George’s Park and the Wanderers (530 of them) his strike rate was a fairly pedestrian 29.43 and it meant that he only compiled 156 runs at a modest average of 26.

More than anything else, his calm obduracy in the eventually failed second-innings bid to save the New Year Test in Cape Town – when he struck 84 in almost 370 minutes as SA top-scorer – got him most firmly under the spotlight, although he receded after that.

It was the sort of situation, post-series, in which a player not yet assured of his further status in the team would usually yearn for a swift enough follow-up series to confirm his mettle; to build on some promising enough roots.

But it looks as though he is going to have drop anchor in a different way, given the swelling likelihood that the Proteas will see no Test service at all between the final Test against the English at the Bullring – where their 1-3 fate was sealed, back in late January – and quite possibly Boxing Day (if even that early?) due to the deeply disruptive coronavirus crisis worldwide.

Malan would have hoped to make the broader squad cut – at very least – for the scheduled away series against West Indies during the South African winter, a venture that is fading in likelihood virtually by the day.

Instead, his best chance of knowing whether he remains in favour (he is an unlikely candidate for white-ball internationals as things stand) could only come now when Sri Lanka are earmarked to tour our shores over the festive season for two intended clashes in the World Test Championship … and who knows how much, or rather little, first-class cricket might come his way to underline claims in the interim?

The tenuousness of his position as gnarly Dean Elgar’s opening partner is aggravated by the return to fitness of Aiden Markram, the prior incumbent until he fractured a finger in the Centurion opener against England – the Proteas’ lone victory – to open the gap for the considerably less flamboyant-in-style Malan.

After a rip-roaring start to his own Test career in late 2017, including two centuries and a 97 in his first three games and a really fine series against the visiting, controversy-marred Australians in early 2018, the powerful, Titans-based favourite was having some recessionary issues of his own in later innings in the format.

But Markram is also still averaging just under 40 after 20 Tests and those are solid enough grounds to suggest he would probably nudge Malan out of one of the berths upfront if the national team were to return to action soon; he is probably a better foil for the tenacious Elgar with his more dynamic approach.

There is another factor to consider, though.

It has sometimes been suggested, and not without good reason, that given Markram’s sometimes costly propensity for going that bit too hard, too early, he should be considered a position elsewhere in the top four.

Fielding him at No 4, for instance, would have seemed attractive had long-time skipper Faf du Plessis opted earlier this year to quit the five-day arena as many anticipated he would, for a twilight phase entirely in limited-overs mode.

But in committing to a new CSA contract a few weeks back, it became apparent that Du Plessis still intends representing the Test cause for a bit longer, even if not as captain.

That immediately means more of a “squeeze”, for the foreseeable future, on positions in the middle order … and the greater likelihood that Markram comes back into a more customary role at the top.

Is Malan, not the most youthful of cricketers as he turns 31 in August, destined to become a one-series-only Test player?

There may be a lengthy vigil as he awaits his fate.

But at least that’s a forte of his …