Cape Town - David Miller wrote his name into the annals of the shortest format when he smashed the fastest ever century in the history of T20 International cricket to set the Proteas up for an 83-run victory in the final match of the Bangladesh tour at Senwes Park on Sunday.

As it happened: Proteas v Bangladesh

The victory gave the Proteas a 2-0 victory in the T20 International Series and enabled them to complete a clean sweep across all three formats.

Miller made his century off just 35 balls which was a stunning 10 balls quicker than the previous best by his fellow Protea, Richard Levi.

In the process he became the fourth South African to score a T20 International century after Levi, Morne van Wyk and Faf du Plessis. He also came within one hit of matching Yuvraj Singh’s performance of hitting 6 sixes in a single over. He despatched the first five balls from Saifuddin into the capacity crowd but could not get his bat under the sixth and had to settle for a single.

With 31 runs coming from that over he moved from 51 to 100 off just 13 deliveries during a blitz which included 6 sixes and 2 fours.

Unhappily for Bangladesh he was dropped before he had scored a run but thereafter it wasn’t just Miller Time, it was Miller day.

Up until his onslaught it looked as though Hashim Amla would be the one to become South Africa’s fourth centurion as he helped himself to 85 off 51 balls (11 fours and a six) before being caught in the deep but then Miller took over (101 not out off 36 balls, 7 fours and 9 sixes).

At one stage Bangladesh looked well in the match when they restricted the Proteas to 45/2 in the 6 power play overs and 78/3 after 10 but that proved to be just the calm before the storm.

Bangladesh captain Shakib Al Hasan, who opened the bowling on a slow-paced pitch, took 2/24 in his 4 overs but he was then trumped by South African captain JP Duminy in the same role when he took 2/23.

Bangladesh simply lost too many wickets as they chased a near impossible target, losing 4 top men in the power play overs. 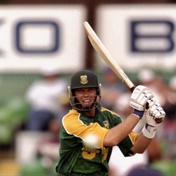