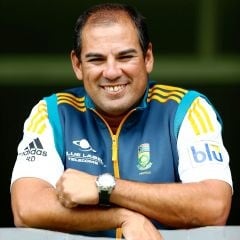 Cape Town – As much as anything else, the Proteas’ fabulous first-Test win at supposed “Fortress Galle” in Sri Lanka on Sunday has to go down as a simultaneous triumph for the new strategic hierarchy of captain Hashim Amla and coach Russell Domingo.

The latter has been in his berth for some time now, but this was their first working alliance in the five-day arena and South Africa delivered in a major way; considering the circumstances it was as comprehensive a victory as has ever been earned by the national side on the Subcontinent.

Of course the mini-series has not been secured yet, with one further encounter scheduled for Colombo’s Sinhalese Sports Club ground from Thursday.

But just avoid defeat there, on a track traditionally kind to batsmen, and SA will have earned their first away series win against these foes in 21 years.

Some of the gloss has been peeled from the Galle victory by damaging worldwide publicity around another ball-tampering incident involving a Proteas player – in the latest instance the fined Vernon Philander – although the margin of 153 runs was wide enough to suggest the tourists would have prevailed minus any jiggery-pokery.

Sublime man-of-the-match Dale Steyn and his long-time head-hunting ally Morne Morkel grabbed 16 match scalps between them and were – pertinently, perhaps? -- just as menacing after Philander-gate had burst into the public spotlight and the second-innings ball was presumably treated in rather more orthodox and saintly fashion while the Proteas were in the field.

There had been several good reasons to feel anxious back home about South Africa’s prospects before the Galle Test began, not least the fact that their record in Sri Lanka has traditionally been shaky, and the ‘Lankans were much more game-sharp having come straight off an impressive series victory in England.

This was also a Proteas team setting out on a fresh era with some rookie personnel and no longer able to summon established Test giants like Messrs Kallis and Smith.

Throw in the fact that spin-conducive Galle is normally a seriously happy hunting ground for Sri Lanka, and that the visitors were still brushing off domestic winter rust, and the portents first-up certainly did not suggest a near-crushing SA win.

This is where Domingo comes in: he would have been as painfully aware as anyone of the hoodoo surrounding the Proteas in terms of “first Test syndrome”.

His view is that it cannot be wished away; it is indelibly in the record books. So his solution, as expressed to this writer before tour departure, was to encourage his men not to obsess over it too much for fear it would only aggravate the weakness.

The slow-start trend goes back further, but only made more horribly apparent in recent times by three successive instances, before the ‘Lankan mission, of South Africa largely failing to deliver the goods in first contests.

They were gored by Pakistan in the first of two UAE Tests in Abu Dhabi in 2013, then were outplayed for the lion’s share of the drawn first 2013/14 home Test against India in Johannesburg before so nearly, dramatically snatching it, and then trounced by 281 runs to get the home series against Australia fatally off on the back foot.

Well, the jinx was emphatically shattered in Galle, with the Proteas looking a focussed and unusually stamina-laden unit right from the off -- a pleasant change from many prior first Tests, and presumably with Domingo at least in some way responsible for the new spirit of urgency and improved mental preparedness.

As for Amla, he ticked an equally welcome box for strategic enterprise in his maiden appearance as full-time Test skipper by proving that his brave declaration at tea on day four, to begin the big push for victory, was anything but a rash move.

I was among critics just a little fearful – particularly when Sri Lanka overnighted on 110 for one chasing 370 – that he might have left the door open to a cheeky home win, a result that would, let’s face it, have been a calamity considering SA’s hitherto iron grip on the game.

But perhaps we of little faith had simply become too accustomed over many years to South Africa first ensuring they eliminated any threat of defeat -- by setting an impossible requirement to the opposition -- before striking for victories that have occasionally proved infuriatingly, narrowly elusive as the sands of time run out.

Amla’s positive move provided a refreshing reminder that it often pays dividends to keep the foe “interested” rather than simply committed to a stone-wall approach on the last day.

Who knows, perhaps old SA nemesis Kumar Sangakkara, going threateningly well at the time on 76, might not have complacently glided a rank long hop from JP Duminy straight into the hands of Amla had his thoughts for Sunday been solely geared toward stalemate?

Having sounded a message that he may well favour an attacking approach to captaincy on a consistent basis, Amla seems unlikely to encourage a cautious attitude in the decisive Colombo Test, something that might only play into the desperate Lankans’ hands.

This particular Test series job is only half done, but if a vibrant new era is in the making for the Proteas, it has begun rather promisingly ...

We live in a world where facts and fiction get blurred
In times of uncertainty you need journalism you can trust. For only R75 per month, you have access to a world of in-depth analyses, investigative journalism, top opinions and a range of features. Journalism strengthens democracy. Invest in the future today.
Subscribe to News24
Related Links
Declaration gamble pays off
Proteas destroy Sri Lanka
As it happened: SL v SA - Day 5
Next on Sport24
Domingo lifts Proteas' bar