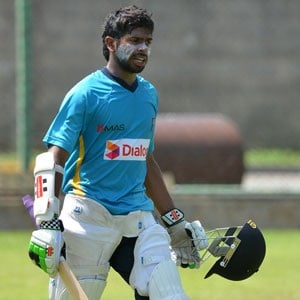 Colombo - Sri Lanka may hand a first Test cap to 21-year-old wicketkeeper Niroshan Dickwella as they bid to level the two-Test series against South Africa.

Dickwella was drafted into the squad for the match in Colombo starting on Thursday after fast bowler Shaminda Eranga was ruled out of the series with a hand injury.

Eranga had eight stitches inserted to the webbing between his right thumb and index finger while fielding in the first Test at Galle which Sri Lanka lost by 153 runs.

"Chandimal is available for selection but Dickwella also has a good chance of playing tomorrow," captain Angelo Mathews told a news conference on Wednesday.

"We will take final decision after looking at the wicket."

Mathews said the loss in Galle was a wake-up call for his team who had been in a good run since December, winning the Asia Cup, the World T20 and their first Test series in England.

"If you look at the past six months we have played some good cricket but that is all history and in the past, we have got to move on take one game and series at a time," Mathews said.

"Every series is a challenge for us it is mentally and physically depressing, it can take a lot out of your body as well but that's the challenge as players we have got to face."

The Singhalese SC track is normally excellent for batting.

"It is usually a flat wicket, it does a little bit in the morning session and then turns out to be a batting paradise. I hope it will be different," said Mathews.

"But whatever the pitch we play on we've got find ways to beat South Africa.

"They are a very balanced team in all three departments and we expect a massive challenge from them.

"We have got to sharpen our game in every aspect to compete with them. It's all about mental preparation, we need to prepare for it and the toss won't make a massive difference," he added.