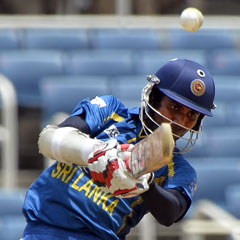 Colombo - Opening batsman Upul Tharanga is in line for his first Test appearance in seven years after being named in the Sri Lanka squad for the two-match series against Proteas, starting at Galle on July 16.

Left-hander Tharanga's last Test was against England in 2007 but he has been out of favour in the five-day game since, although he has been picked for one-day internationals.

Pradeep and Jayawardene are injured while Kulasekara has been dropped in favour of spinner Ajantha Mendis, who played his last test against Bangladesh in February.

Pradeep led the attack in the recent series victory over England, while Jayawardene missed the second test due to an injured thumb and was replaced by Dinesh Chandimal, who will keep his place against South Africa.

We live in a world where facts and fiction get blurred
In times of uncertainty you need journalism you can trust. For only R75 per month, you have access to a world of in-depth analyses, investigative journalism, top opinions and a range of features. Journalism strengthens democracy. Invest in the future today.
Subscribe to News24
Related Links
ICC ban SL's Senanayake
Historic Proteas win hailed
Proteas claim series win
Next on Sport24
Domingo lifts Proteas' bar

Choose your newsletters
Voting Booth
After the opening weekend of URC action, what did you make of the South African struggles?
Please select an option Oops! Something went wrong, please try again later.
It exposed the quality of South African rugby...
38% - 2066 votes
There were positives to take
7% - 362 votes
We shouldn't read too much into one weekend
17% - 901 votes
It will take the SA sides time to adjust to the new competition
39% - 2094 votes
Previous Results
Showmax
The story of a legend: Sir Alex Ferguson