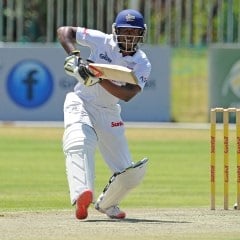 Cape Town - Omphile Ramela struck his second century of the season to lead the Cape Cobras to 222/4 in their second innings at stumps on the third day of their Sunfoil Series match against the Knights at the Mangaung Oval in Bloemfontein on Sunday.

The visiting captain hit 109 (201 balls, 16 fours, 2 sixes) as he and opening batsman Andrew Puttick, who scored 64 (174 balls, 8 fours), shared in an impressive second-wicket partnership of 165 that saw the Cobras end the day holding an overall lead of 187 runs over the hosts.

The Knights had been bowled out for 376 in their first innings, shortly before lunch, holding an overall lead of 39 runs with off-spinner Dane Piedt ending with figures of 5/106, the 14th five-wicket haul of his career.

The stand was finally broken when Coetsee was dismissed by Piedt, who then ended the innings as he claimed his fifth wicket when he removed Siboto, who faced just 58 balls during his entertaining knock, courtesy of a caught and bowled effort.

The Knights made an impressive start with the ball during the Cobras’ second innings when paceman Duanne Olivier removed opening batsman Simon Khomari for a duck. But Puttick and Ramela rebuilt the innings before part-time bowler Reeza Hendricks struck twice in quick succession to remove Ramela and Stiaan van Zyl (2). The wickets were just the second and third that Hendricks had claimed in 103 first-class matches.

Puttick was dismissed shortly before the close of play after he and Justin Ontong had shared in a 36-run fourth-wicket partnership.

Ontong ended the day on an aggressive 38 not out off just 45 balls that included seven fours.

Hendricks reached stumps with figures of 2/25.