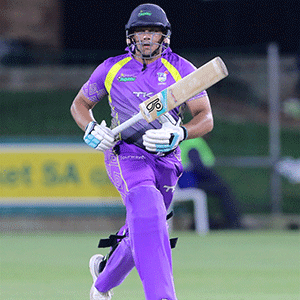 Cape Town - Vaughn van Jaarsveld struck the highest individual score of the season to help keep the slim CSA T20 Challenge semi-final hopes of the Dolphins alive with a seven-wicket victory over the Warriors at St George's Park in Port Elizabeth on Friday.

The opener battered five sixes and 12 fours in a 69-ball unbeaten 112 as the visitors made light work of a 154-victory target, crossing the finish line with 10 deliveries to spare.

It was a much-needed win for the Durbanites, only their second of the season, but one that helped them move on to 16 points - three behind the Titans in the final qualifying spot with one round of the regular season to come on Sunday.

Van Jaarsveld was unquestionably the star, but his career-best score and maiden T20 ton came after the bowlers had turned in a solid showing to restrict their hosts after winning the toss and bowling.

They had the Warriors on 32 for three after an early wicket each by Robbie Frylinck (2/35), Daryn Dupavillon (1/31) and the outstanding Keshav Maharaj (1/18).

From among the top-order batsmen, only Matthew Breetzke (41) managed to make any headway, with Prenelan Subrayen also excellent for the Dolphins with a strangling two for 24.

The home side did manage to recover late in their innings thanks to an 81-run seventh wicket stand between Andrew Birch (32) and Sisanda Magala, who smashed a career-best franchise score of 50 off 32 balls (5 fours, 2 sixes).

The partnership ensured the Warriors recovered from 72 for six at one stage to a much rosier 153 for seven.

But that proved no match for Van Jaarsveld and co. The veteran former Proteas batsman put on 40 for the first wicket with Morne van Wyk, who contributed just three, then added 81 with Cody Chetty (26) and finally all but completed the job with Andile Phehlukwayo (7) alongside him to give the away side a competition lifeline, albeit one that depends on the outcome of other results.